CABANATUAN CITY—Army troops and Air Force helicopter-borne teams on Monday joined civilian relief officials in rescuing hundreds of people marooned in their flood-stricken homes and on rooftops as a slow-moving Typhoon “Lando” plodded across northern Luzon.

The death toll from Lando (international name: Koppu) stood at 14, according to reports gathered by the Inquirer bureaus from police and local Office of Civil Defense (OCD) officials. Three deaths each were reported in Nueva Ecija and Pangasinan, two each in Ifugao, Zambales and Quezon City and one each in Mt. Province and Benguet.

The National Disaster Risk Reduction and Management Council (NDRRMC) in Manila said it had counted three deaths as of Monday. “We are still receiving reports of casualties which we are still validating, it’s difficult to release information that is not verified,” said Alexander Pama, the head of the council.

The typhoon smacked across Aurora province before dawn Sunday with fierce winds and heavy rains, weakening as it hit land but drenching wide areas and igniting flooding and landslides.

In its 5 p.m. bulletin Monday, the weather bureau downgraded Lando to a severe tropical storm with maximum winds of 105 kilometers per hour, down from 120 kph earlier in the day, and gusts up to 135 kph, from earlier 150 kph.

The NDRRMC said 58,476 families, or 283,486 people, were affected by the typhoon, mostly in Ilocos, Cagayan Valley, Central Luzon, Calabarzon and Cordillera Administrative Region (CAR). Of this figure, 15,354 families or 69,747 people were staying in 370 evacuation centers.

The agency has monitored 74 incidents so far in the Ilocos, Cagayan Valley, Central Luzon and Metro Manila, of which 72 were flooding incidents. Initial reports put the damage to agricultural crops at P4.6 billion.

Four teams from the Philippine Air Force and three from the Northern Luzon Command scrambled Monday to rescue hundreds of villagers trapped in their homes, complementing local police forces in trying to reach flooded villages by boats or helicopters in Cabanatuan City and Gabaldon town in Nueva Ecija.

“There were some people who needed to be rescued from the roofs of their homes,” OCD’s Nigel Lontoc said. “But our rescuers couldn’t penetrate these areas because the floodwaters were still high.”

Hundreds of soldiers, police and volunteers have converged in Nueva Ecija to help villagers whose homes have been flooded, said Lontoc.

Barangay chief Raymond Flores said he sent dump trucks at 4 p.m. for a preemptive rescue operation but many residents refused to leave their houses. About an hour later, rampaging flood waters submerged a large part of the village, trapping several families.

“Had they heeded our plea and left their houses immediately, they would have escaped the floods,” Flores said.

As of Monday morning, at least 1,700 families had sought refuge in evacuation centers in Cabanatuan.

The NDRRMC has recorded 56 houses in northern and central Luzon which were damaged. 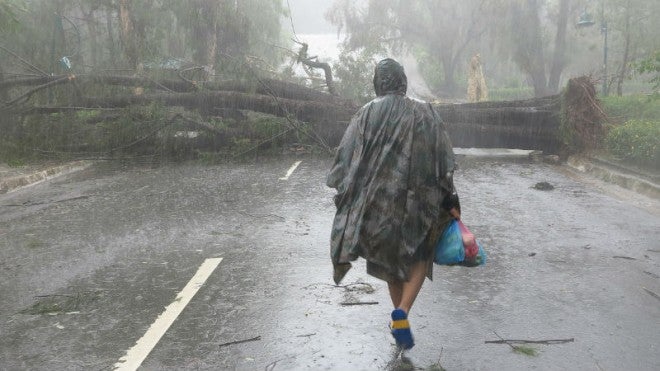 Authorities warned evacuees, particularly those living near the Pampanga, Agno and Cagayan river basins, not to return to their homes in the meantime as more floods may occur once waters flow down from the mountains.

“As we extend assistance and rescue those affected by Typhoon Lando, we also give out warnings to those who are in the typhoon’s path,” Pama said.

Vicente Malana, acting administrator of the Philippine Atmospheric Geophysical and Astronomical Services Administrator (Pagasa), said the waters from the mountains near these river basins would begin to flow down in the coming days.

“In our Arayat station, we observed that the water is rising, so the water will be flowing down from Arayat to Pampanga river. It’s best if they don’t return to their homes in the meantime since it takes half a day for the water to flow down,” Malana said.

Esperanza Cayanan of Pagasa said the typhoon was expected to exit the landmass through Cagayan or Ilocos Norte, travelling in a northeast direction.

“Landslides and flash floods are to be expected in northern Luzon, especially in the western section, as the typhoon leaves the landmass on Tuesday afternoon,” Cayanan said.

Pama said the NDRRMC had monitored 70 flooding incidents in northern and central Luzon, and Metro Manila. He said that although dams had been releasing water, there was no imminent danger so far.

Ambuklao, Binga and Magat dams have released water in the past days, while Angat needs nine meters more of water and Pantabangan Dam, 16 more meters.

The agency has recorded 31 road sections and 18 bridges rendered impassable due to landslides and floods, including the Kennon Road in Baguio City.

The two men earlier reported to have drowned in Palayan City turned out to be alive, OCD reports said.

The OCD said 22 villages in Nueva Ecija remained under 2 meters of water. These are eight villages in Gabaldon town, six in Sta. Rosa town, four in Palayan City, three in San Leonardo town and one in Carranglan town.

At the height of the flooding in Jaen town, flood water reached more than a meter in 12 villages.

Umali said water from the Sierra Madre mountain range caused the floods that stranded hundreds of vehicles on the national highway on Sunday night.

A teacher in Sta. Cruz town was found dead on Monday in a farm in Barangay Gama. Relatives said Evangeline Mas, 58, a teacher at Gama Elementary School, could have drowned in the flooding.

In Pangasinan, officials said Mauro Muerong, 75, died after a tree fell on his hut in Barangay Pampano in Mangatarem town Sunday. Jan Kerby Capena, 1, died after his family’s house was hit by a fallen tree Monday in Barangay Ilog-Malino in Bolinao town. His parents, Ariel, 47, and Esmeralda, 37, were injured. Regina Sabangan, 80, died after her head hit a concrete floor when she slipped inside her house in Barangay Bongato in Bayambang town on Monday.

A big part of Pangasinan province was still without electricity on Monday.