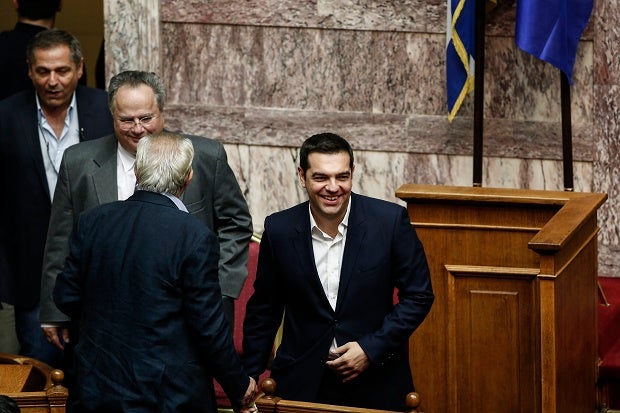 Lawmakers early Saturday voted 154-140 in favor of the bill required for a 2 billion-euro ($2.3 billion) loan installment. It is part of Greece’s third major bailout agreement with eurozone lenders, worth 86 billion euros ($98 billion) over three years.

“There are no new measures here. There are difficult measures that we all knew about,” Tsipras said.

That July bailout deal saw Tsipras abandon a pledge to bring an end to austerity and alienated a large section of his radical left Syriza party.

The split forced him to call an early election held on Sept. 20. Syriza came out on top and was able to return to government with the small right-wing Independent Greeks.

Late Friday, several thousand protesters, many from a Communist backed labor union, joined a peaceful anti-austerity rally outside parliament before the vote. Several prominent politicians who were former Tsipras allies joined the protest.

“We can’t accept a new crime at the people’s expense. They’re trying to destroy the welfare state. Everyone must fight it,” protester Eleni Menegaki said.

Tsipras’ Cabinet is now racing to overhaul its troubled pension system and impose a raft of new cutbacks. The measures are required before crucial funds can be injected into the country’s ailing banks.

The government also wants relief from its debt, which is set to exceed 190 percent of Greece’s annual national income next year. Eurozone lenders have promised discussions but only if certain economic measures are met.

The cost of the austerity measures, alongside with the ongoing controls on money transfers in the country, are expected to keep Greece in recession over the next two years and unemployment above 25 percent.

Tsipras faced little dissent from his party or right-wing coalition partners during a parliamentary debate on the bill that started at committee level Tuesday.

All six opposition parties voted against the bill.