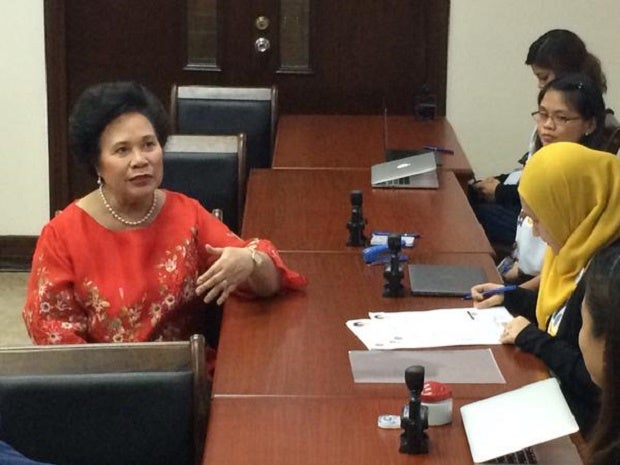 Senator Miriam Defensor-Santiago files her certificate of candidacy for president at the Commission on Elections headquarters in Intramuros, Manila. PHOTO BY JOCELYN UY/PHILIPPINE DAILY INQUIRER

This was what Sen. Miriam Defensor-Santiago told reporters after she filed her certificate of candidacy for president on Friday at the Commission on Elections headquarters in Intramuros, Manila.

Santiago, who is seeking the presidency for the third time, admitted that the political landscape, particularly campaigning, has underwent drastic changes from the past.

Saying that many people have been telling her that she is the voice of the youth, Santiago recognized the impact of social media in today’s campaigning.

“I hope that this voice will be resurrected and will prevail in the elections,” Santiago said.
Santiago first ran for president in 1992 but lost to former president Fidel V. Ramos in a hotly contested race. She also joined the 1998 presidential derby, where she placed 7th out of 10 candidates. Former president and now Manila Mayor Joseph Estrada was elected to office via landslide victory that year.

It was also in social media where Santiago hinted that she will run for president. Last week, she shared a feeler quote graphics and a video of her 1992 speech prior to her confirmation on Monday.

Santiago, who vacated her post as judge of the International Criminal Court, is currently on medical leave at the Senate for battling Stage 4 lung cancer.

But noting that she has already conquered the disease, Santiago said the Philippines will be a better country if she will become president “in the near future.”

Citing a “mutual collaboration,” the feisty senator on Thursday also confirmed that Sen. Ferdinand “Bongbong” Marcos Jr. will be her running mate in next year’s polls. The late dictator’s son and namesake also said he talked with Santiago’s husband for “possible alliances.” CDG