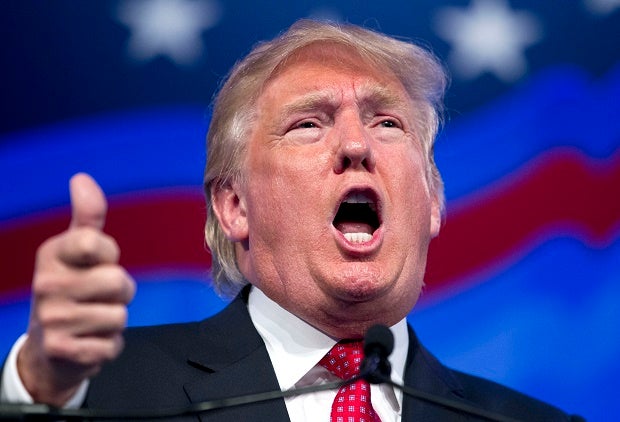 In this Sept. 25, 2015, file photo, Republican presidential candidate, businessman Donald Trump, speaks during the Values Voter Summit in Washington. Using Twitter to get a message out is now a must-do for presidential candidates, but looking at the accounts they follow can be instructive, too. Their follow list can reflect not only their personality and interests, but sometimes their strategy. AP Photo

LAS VEGAS, United States—Republican presidential frontrunner Donald Trump was not about to let Democrats steal the limelight in their first 2016 debate Tuesday, offering his own running commentary of proceedings and their electoral chances.

The carefully coiffed real estate mogul needled his possible general election adversaries on Twitter even before they took to the lecterns.

“Maybe a star will be born (unlikely),” he said.

As the debate kicked off, he was no less scathing.

“Can anyone imagine Chafee as president?” he asked. “No way.”

“O’Malley, as former Mayor of Baltimore, has very little chance.”

“The trade deal is a disaster, she was always for it!” Trump tweeted.

And he returned to his common refrain that only he can stand up for America on the international stage.

“Putin is not feeling too nervous or scared,” he said.