Tolentino continues Senate run, wants to move on from controversy

Resigned Metro Manila Development Authority (MMDA) chairman Francis Tolentino on Wednesday confirmed that he will for senator as an independent candidate in the 2016 elections.

(I filed my certificate of candidacy as an independent.)

Tolentino was reportedly initially included in the Senate slate of the ruling Liberal Party, but he asked to be removed from the 12-member ticket following the “Playgirls” controversy.

Tolentino came under fire after supposedly hiring the sexy all-female group as birthday gift to a Laguna lawmaker, which coincided with an LP event in the province.

But the ex-MMDA chief said he wants to move forward from the controversy with his Senate run.

“Tapos na ‘yun. I already issued an apology. I even asked to be removed from the Liberal Party slate… Tapos na siguro ‘yun. We move forward. I’d like to talk about substance,” Tolentino said.

(I am over it. I already issued an apology. I even asked to be removed from the Liberal Party slate. It’s probably over. We move forward. I’d like to talk about substance.)

But in spite of running as independent, Tolentino said he believes he still enjoys the trust and confidence of President Benigno Aquino III.

“When I resigned, the president issued a statement expressing gratitude and full support,” he stressed.

If ever elected, Tolentino said he will prioritize disaster recovery and rehabilitation and urbanization problems.

Tolentino, who served as mayor of Tagaytay City, said he attached his resume and legislative program of government in his COC. He was accompanied by Cavite and Caloocan officials during the filing. IDL 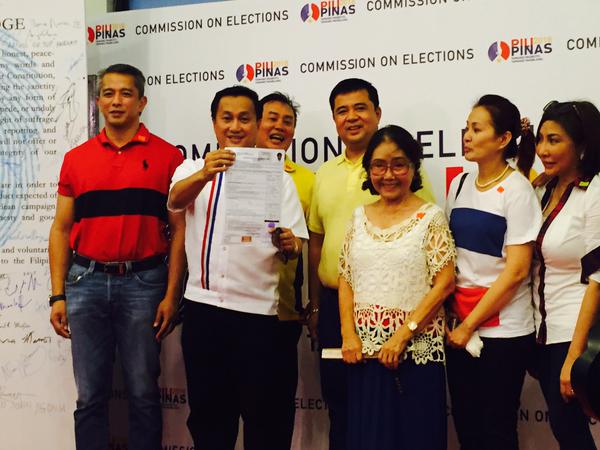 After a controversial stint as MMDA chief, Francis Tolentino wants to “move forward” as a senatorial aspirant. YUJI VINCENT GONZALES/INQUIRER.net