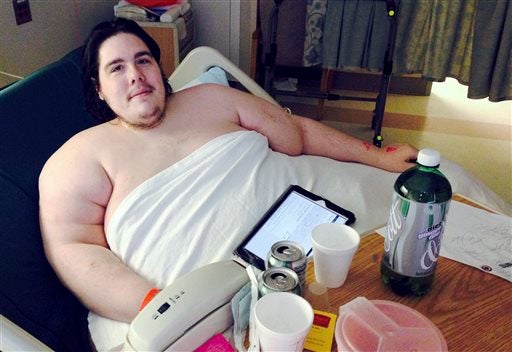 In this Monday, Oct. 12, 2015 photo, Steven Assanti, 33, rests in bed at Kent Hospital in Warwick, R.I. Assanti, of Cranston and who weighs nearly 800 pounds, said he was kicked out of another hospital for ordering pizza. Assanti said he is determined to slim down and hopes to eventually drop to 180 pounds. He said a surgeon read about him and offered to fly him to Texas to help him lose weight so he can have gastric bypass surgery. (AP Photo/Jennifer McDermott)

WARWICK, R. I. — A Rhode Island man who weighs nearly 800 pounds (363 kilograms) says he’s determined to slim down and he dreams of becoming an actor one day.

Steven Assanti, of Cranston, refers to himself now as a monster. He wants to eventually inspire others who struggle with their weight.

The 33-year-old said he’s addicted to pizza, as long as it’s not topped with anchovies.

“I love food. I always loved to eat,” he told The Associated Press Monday. “I didn’t think it would cause me harm and make me into the monster that I am right now. I don’t feel human.”

Assanti spoke to a Rhode Island television station, WJAR-TV, last week after he said he was kicked out of Rhode Island Hospital for ordering pizza.

The television production company for TLC’s “My 600-lb Life” then contacted Assanti. The owner’s assistant at Megalomedia said they may be interested in filming him, though not necessarily for that show.

Assanti wants to have gastric bypass surgery. At 6 feet 1 inch tall, he said he must slim down to 550 pounds to be eligible. After, he hopes to eventually drop to 180 pounds.

Assanti has been putting on weight since high school. He tried countless diets.

Now at Kent Hospital in Warwick, Rhode Island, Assanti said he eats 2,000 calories a day or less, he’s taking antibiotics for a leg infection and he roams the hallways using a walker for exercise. He doodles his name on scrap paper, a longstanding habit, in case people start asking for his autograph someday.

Rosie O’Donnell, who had weight-loss surgery, inspires him.

“I want to make that change, show people the new Steven,” Assanti said. “I want to live a life.”

Three months ago, Assanti said he went to Rhode Island Hospital because of the leg infection. Staff there agreed to monitor his behavior and help him lose weight, he said.

His behavior can be disruptive because he gets frustrated when he’s hospitalized, he said. An online video shows Assanti repeatedly yelling for a nurse during a previous hospital stay.

Rhode Island Hospital does not have a weight loss program, but Assanti said he was given information about the Center for Bariatric Surgery in Providence.

Assanti acknowledges ordering pizza to his room, though he questions why no one stopped the delivery man.

A hospital spokeswoman said Assanti was discharged but wouldn’t comment further due to confidentiality laws.

Assanti said he couldn’t climb the stairs in his father’s home so he faced living in the back of his father’s SUV. He said he felt “wrecked” and depressed and knew he needed to change.

Kent Hospital agreed to take him in for a short-term stay, he added.

“Pizza will always be there,” Assanti said. “But I won’t. I could die.”

Assanti weighed 778 pounds at Rhode Island Hospital. He thinks he has lost a few pounds since arriving at Kent, and said he plans to “shock the world” with his progress.