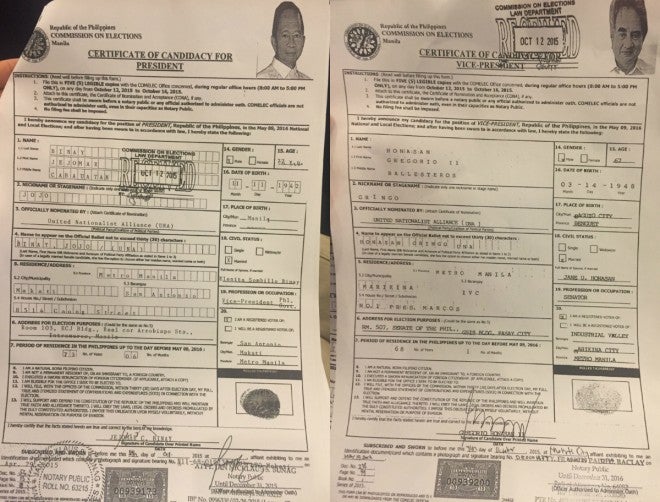 Vice President Jejomar Binay and Senator Gregorio “Gringo” Honasan officially sealed their presidential and vice presidential team-up for the 2016 elections when they filed their certificates of candidacy (COC) on Monday.

The “BinGo” tandem, as the United Nationalist Alliance (UNA) prefers them to be called, was the first tandem who filed their COCs at the headquarters of the Commission on Elections in Intramuros, Manila. The deadline of filing is on Friday, Oct. 16.

Binay and Honasan first attended a Mass at the nearby San Agustin Church before proceeding to Comelec.

The Vice President was accompanied by his children, Senator Nancy Binay and suspended Makati mayor Junjun Binay, who was recently dismissed and perpetually disqualified from public office by the Ombudsman for grave misconduct and dishonesty over the controversial Makati parking building.

Binay, who is facing five plunder complaints and two graft probes over various allegations, announced his presidential run and declared himself as opposition leader after resigning from the Cabinet of President Benigno Aquino III.

Honasan, whose term in the Senate ends in 2019, was among three personalities eyed by UNA as Binay’s running mate. The opposition party also considered Sen. Ferdinand “Bongbong” Marcos Jr., but the dictator’s son and namesake declined the offer due to “political differences.” Yuji Vincent Gonzales/JE

Honasan finds ‘Bi-Hon’ not to his taste