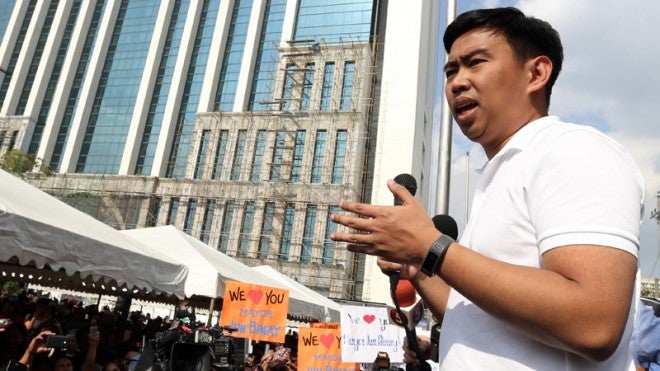 Makati Mayor Junjun Binay talks to his supporters in front of the Makati City Hall in this file photo taken on Jan. 27. NIÑO JESUS ORBETA

The axe has fallen on the scion of one of the country’s most influential political clans.

Makati Mayor Junjun Binay, the son of Vice President Jejomar Binay—along with 19 other city officials—has been perpetually barred from government service by the Office of the Ombudsman over the allegedly anomalous construction of the P2.28-billion Makati City Hall Building II.

The decision of the antigraft body may signal the end of the Binay family’s decadeslong stranglehold on the city where the country’s main financial district is located.

Only a few hours before, Binay’s father, a declared candidate for President, had just launched his opposition United Nationalist Alliance (UNA) party in Cebu province.

Ombudsman Conchita Carpio Morales ordered the dismissal of Binay et al. from public service after they were found to be administratively liable for grave misconduct and serious dishonesty in the construction of the 11-story structure, described as “the most expensive parking building in the entire country.”

In a separate order, Morales meted out the same penalty on detained Masbate Gov. Rizalina Seachon-Lanete and 11 other government officials in connection with the alleged misuse of P112.3 million of Lanete’s pork barrel allotments when she was House representative from 2007 to 2009.

Instead of releasing a copy of its 103-page joint resolution, Morales’ office just issued a press statement on its decision to sack Binay and the other City Hall officials.

“(F)lagrant anomalies were found to have been committed by Binay et al. in the design and construction of the building consisting of six phases,” Morales said in a statement

“Binay had the obligation to ensure that the contracts he was entering into were fair, reasonable and advantageous to the government,” she said.

In a brief interview with reporters, Morales said she had also ordered the forfeiture of all the retirement benefits of Binay et al.

Asked if Binay could still seek an elective post in the 2016 elections, Morales said: “It’s up to the authorities to determine if he files a certificate of candidacy and if it will be honored. That’s no longer my concern.”

“The administrative decisions of the Ombudsman are immediately executory,” she added.

According to the Ombudsman, the erring Makati officials awarded the first phase of the multibillion-peso project to Mana Architecture and Interior Design Co. without conducting a public bidding.

“The documents established badges of fraud committed by Binay et al. … in manipulating the procurement to ensure the award of the contract to Mana,” it said.

The Ombudsman said the respondents also approved and processed the payment of nearly P12 million to the contractor “despite the incomplete submission of deliverables such as design plans, working drawings and technical specifications.”

“It bears emphasis that despite the irregularities involved in the procurements and glaring ‘red flags’ already present in the early stages … (Binay) still went on to approve the release of the last two payments in favor of Mana,” the Ombudsman said.

“By so acting, Binay intentionally closed his eyes to the irregularities by failing to observe utmost diligence,” it added.

In its decision, the Ombudsman said the invitation to bid for the project was not published, a clear violation of Republic Act No. 9184, or the Government Procurement Reform Act.

“A certified true copy of the publication obtained from the National Library showed that no advertisement for the invitations to bid was made as attested to by the publisher,” it said.

The Ombudsman said there was “undue haste” in awarding the project to Mana, noting that the bids and awards committee (BAC) completed the procurement process for the project in “only 11 days.”

It said the negotiation and evaluation of the bid proposals held on Nov. 22, 2007, were held “with extraordinary speed.”

“For one hour only, the BAC completed the entire negotiation proceedings where bid proposals of seven architectural firms that allegedly participated in this multimillion-peso project were opened and evaluated,” the Ombudsman said.

In fact, a report prepared by the Commission on Audit’s Fraud Audit Office concluded that “the negotiated procurement adopted by the BAC was improper.”

In addition, the Ombudsman said the four remaining phases of the construction were given to Hilmarc’s Construction Corp., the lone bidder for the projects, “despite the lack of the required publication of the invitations to bid.”

“(The) construction project began even in the absence of approved design standards, contract plans, agency cost estimates, detailed engineering and programs of work,” the Ombudsman said. “No preprocurement conference was undertaken and bid documents were made available only for one day in violation of (the procurement law).”

“(T)here was collusion among (the) city officials and Hilmarc’s to manipulate the outcome of the five ‘public biddings’ for the purpose of ensuring that Hilmarc’s would be awarded the contracts,” it stressed.

Read Next
Binays unfazed; son will run
EDITORS' PICK
In Borongan, nuns play hoops (not mahjong)
House energy committee chair Arroyo bats for cheap electricity
A laptop that maximizes your WiFi so you can maximize your productivity
Why Tagle is a leading papal contender
Powered by style, innovation and passion
KWF has no power to ban, censor written works – Lagman
MOST READ
Zubiri on SRA mess: Shameful, disgusting
Why Tagle is a leading papal contender
Arjo Atayde reveals proposal to Maine Mendoza was ‘more than a year’ in the making
My neighbor FVR: From soldier to president
Don't miss out on the latest news and information.