This is because the NP has three members–senators Alan Peter Cayetano, Ferdinand Marcos Jr. and Antonio Trillanes IV–contending for the second highest post in the country.

Laguna Governor Ramil Hernandez led the oathtaking of 12 Laguna mayors as new members of the NP at the Calamba town plaza on Thursday afternoon.

After the local executives were sworn in, Hernandez, the provincial chair of NP, and Las Pinas Rep. Mark Villar, son of NP president Manny Villar, led the forming of local alliance with Roxas.

But with NP fielding three of its members–Cayetano as the party secretary-general–the NP is unlikely to support Robredo, according to Hernandez.

“We were given the freedom in Laguna to choose a president to support. There are no formal talks yet on who will the NP support for vice president but of course our priority is the NP [candidates],” he said.

“It just so happened that no NP member ran for presidency but of course, we will support our partymates,” he added. 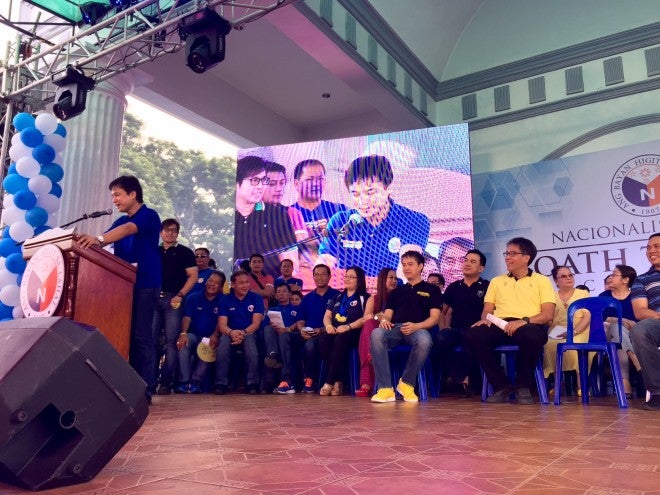 No senate bid for Villar

Meanwhile, Roxas confirmed in his speech that Representative Villar will not run for senate in 2016.

In an ambush interview, Villar said backing out in the senatorial race was a “personal decision” after consulting with his family.

“I have a 2-week old baby so I want to spend more time with my family. I also want to finish what I started as a congressman,” he said.

Villar is one of the NP members being considered for the administration coalition’s senate slate.

On Monday next week, the LP will announce its final lineup for the senatorial race. TVJ