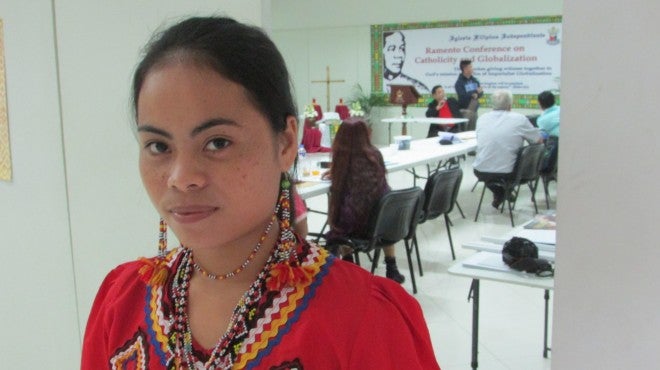 Talang Belandres was drawing a diamond on the floor at the sidelines of a conference of church people at the compound of the National Cathedral of the Iglesia Filipina Independiente in Ermita, Manila.

The 21-year-old Manobo, one of nearly 3,000 individuals who fled their homes, was recounting to the Inquirer what happened at daybreak on Sept. 1, just minutes before armed men killed three important figures to their tribe.

They had been separated into men, and married and single women, she said. Two corners of the diamond were for the men, one each for the two other classifications.

Most in their family were at the wake of their grandfather in Sitio Han-ayan, scheduled for burial in the morning, when some 20 to 25 men began telling people to move out of their homes. They were wearing fatigues, some had masks on.

The armed men, identified as Magahat-Bagani, led everyone to the covered court in Kilometer 16, some 100 meters away. The place is called Kilometer 16 because it is exactly that far from the village proper of Diatagon barangay in Lianga, Surigao del Sur.

“We know them. Some of them are related to us … We haven’t seen them in a long time because they decided to leave,” Talang said. “When they came, they were rushing. It’s like they were following a plan.”

The narrative began days before, she said.

They arrived in Han-ayan on Aug. 30, she recalled. They introduced themselves as members of the 75th Infantry Batallion.

Reports also place the 36th IB and Special Forces there.

“They said they were there because they wanted to implement a project, and to talk to the chairman and the datu.”

They were referring to Dionel Campos, 41, the chair of Manobo group Malahutayong Pakigbisog Alansa sa Sumusunod or Mapasu (“pakikibaka para sa sumusunod na lahi ng mga Manobo,” in Filipino), and Juvello Sinzo, 69, the group’s datu. They are two of the three who perished in the incident.

The soldiers slept in classrooms of Tribal Filipino Program in Surigao Sur, which provides elementary education to Han-ayan and Kilometer 16. Talang teaches there.

“In the morning of Aug. 31, the local folk, including our municipal tribal chieftain, talked to them,” she recounted. “Years before, in 2011, there was an agreement that the military would not enter our land. That was our argument.”

“They did exit in the afternoon of the 31st, but at dawn of Sept. 1, the paramilitary troops arrived.”

That sequence of events proves at least to Talang that the military and the paramilitary were connected. But reports also note soldiers were around when the assault happened. Others say they watched as the paramilitary group opened fire, and as the villagers evacuated.

“They went straight to the homes, knocking on peoples’ doors. They were in a hurry. They threatened those who moved slowly. You cannot blame these people because they were deep in their sleep.”

Talang knew that was no empty threat—they would open fire at the homes.

The armed men led everyone in Han-ayan to the home where their dead lolo was, and then went to Alternative Learning Center for Agricultural and Livelihood Development (Alcadev), which in the morning would reveal another casualty—Emerito Samarca, 54, executive director.

“They trooped to the school, 200 meters away, and led the staff and students to us,” she said. “Tatay Emok was held there in his quarters, where he was found dead.”

Except for a person to guard the wake, everyone was then led to Kilometer 16. There were around 300, Talang narrated.

“Some explained why we were being rounded up,” she said. “They told us to relax, not to worry, because nothing would happen to us. They said: ‘If only you let the investors in this place would prosper.’”

Their lands, situated in mineral-rich Andap Valley, had long been eyed for development, she explained. “They said if we were still in our sitios three days after that morning, we would be massacred.”

After their 10-minute spiel, they took Dionel, “Onel” to Talang, and the rest of the community.

“They led him behind the unmarried women, in a home with a store, also owned by a resident,” she recalled. “They spoke a little and then shot one or two times at Onel. Everyone screamed.”

They also took the datu, Juvello or “Bello.” He was visiting from Kiwagan in San Isidro barangay for the wake.

“After their killing spree, we sat there, quiet and motionless for about five minutes. We were all afraid,” she said. “After they killed the two, they hurriedly moved out.”

It all happened in less than two hours, she said, between 4 and 6 a.m. The gunmen’s explanatory speech took over 10 minutes, and the killing less than that, she said. 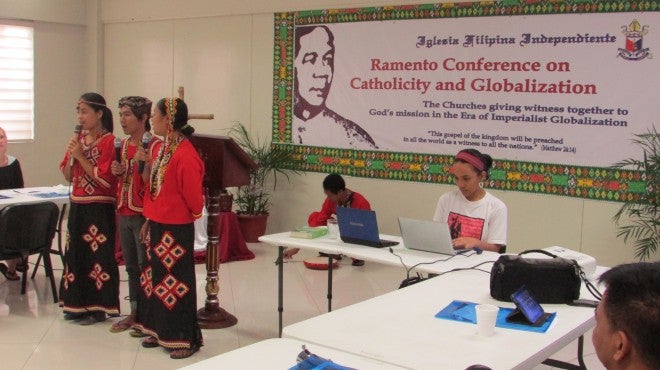 Talang sings with fellow Manobo during the conference organized by Iglesia Filipiniana Independiente.

A local cooperative, which brought in merchandise from the lowland, was also burned down. There was an attempt to burn down a new TRIFPS school building.

They brought the bodies with them when they evacuated, she said. Meanwhile, their dead lolo was hurriedly buried.

They had to bypass the Manobo rituals—“All the relatives had to walk under the coffin. After the dead is buried, we were supposed to shower the home with rice.”

In fact, they also had to forego their breakfast.

Han-ayan and Kilometer 16 were the strategic places to carry out an assault because it was the central community for Manobos because of Alcadev, Talang explained.

Around 8 a.m. people were preparing their things for evacuation, with the news spreading fast in all other sitios affiliated with Mapasu, numbering about 20. Every one of them shared the same fear because they were also militarized, she explained.

The communities they passed joined them as they marched down.

“There were kids, elders, fowl, carabaos, pigs. We got to Diatagon proper late in the afternoon.”

They were supposed to settle in the barangay gymnasium there, but soldiers were playing basketball, she said. They called the Surigao del Sur governor, who sent jeepneys to rescue them, and drive them to Tandag City.

‘Land is our life’

It was midnight when they got to the sports center, she said.

At the Ramento Conference on Catholicity and Globalization last week honoring IFI Obispo Maximo Alberto Ramento who was killed in 2006, Talang was also accompanied by Manetem Manico Cayog, a Bagobo who leads Kalumaran, a Mindanao-wide alliance of indigenous peoples.

“We are fighting because our land is our life. Nobody can put a price on that,” Manico said, adding that the three deaths in Surigao del Sur were only a glimpse of the larger picture of heavy militarization, hostilities and land-grabbing in the southern Philippines.

“We want to tell the people our struggles. We need your help,” he said. That was the reason they all flew to Manila and headed to the conference, attended mostly by members of the National Council of Churches in the Philippines, the country’s largest network of non-Roman Catholic Christians.

Talang was wearing a crucifix, although she was not Christian. The Manobo have their own religion, she said. In fact, she was accompanied by their spiritual leader, Baylan Eddie.

She said they made those accessories back in Han-ayan for the Christians that would visit them, to merge their cultures. She used it this time to plead for support.

Paramilitary forces, she explained, were a mechanism to “divide and conquer” the indigenous peoples. The military would recruit forces from among the indigenous groups and arm them.

In many cases, as with the Manobos, these cause “more conflicts and mistrust,” she claimed.

Talang is only a member of Mapasu, she said, but the tragedy inspired her to fly to Manila and speak before conferences upon conferences.

In Han-ayan and Kilometer 16, life was easy, she narrated. “You want to eat? Food is everywhere. We can catch wild pigs, fishes. We have a barter system there. It was peaceful.”

She said her parents fled their homes in the early 1990s because of fear, which later transformed them into an assertive group defending their rights.

It was their hardship that led Alcadev and TRIFPS to build schoolhouses and establish programs there, she said. “Before, they were discriminated because they did not know how to read and write, but they looked for sponsors.”

She is an alumna of both schools. All of the youth at least in Han-ayan and Kilometer 16 are now literate, she said.

The schools taught them literacy, she said, denying military claims that Alcadev was teaching young people “to dismantle guns,” “to train NPA members among the Manobo.”

“It is not true. It is a big no,” she said. “In four years, students are taught agriculture. That is the core subject … We have eight subjects — English, Filipino, Math, Science, Araling Panlipunan, THE, Mapeh and Values.”

“If anything, Values taught us the importance of our culture, to be good members and leaders of our community,” she insisted. “They taught us to understand and be understood in English and Tagalog.”

She said both TRIFPS and Alcadev were recognized by the Department of Education. TRIFPS serves Han-ayan and Kilometer 16, while Alcadev serves the 20-plus Manobo villages that were evacuated—students stay in dorms because they have farm work every 5-7 in the morning.

She’s tired of evacuating, she explained. “The pressure from them has intensified this year but those who perished on Sept. 1 keep us strong.”

“First of all we want justice for the three who died. If we all hide in fear we cannot accomplish anything,” she noted. “Sir Emok, he died for the lumad, so we keep asking, ‘Why shouldn’t we?’ He’s been our inspiration for so long.”

“Onel kept telling us: ‘Whatever happens to the next generation depends on what we do today. If we stop today, if we keep quiet, there won’t be a bright future for them,” she also said. “That’s why now we are filled with energy; why we keep talking.”

They arrived in Metro Manila on Sept. 29 and are scheduled to fly back to Tandag City. On Oct. 26, hundreds of Manobos will arrive in Manila for Manilakbayan 2015, which will last until Nov. 20.

“We just want peace in our place,” Talang said. “We want kalinow. Ah, what is that again in Filipino?”