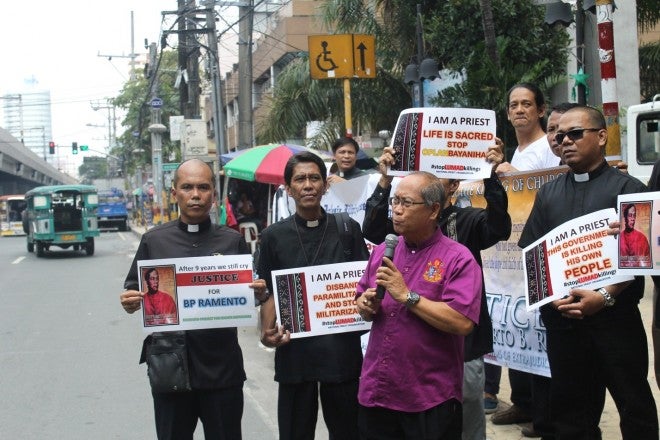 Communities of the Iglesia Filipina Independiente (Aglipayan Church) decried over the weekend what the church claimed was the extrajudicial killing of Obispo Maximo Alberto Ramento nine years ago.

Ramento, the IFI’s highest spiritual leader from 1993 to 1999, was found dead in a makeshift convent at the choir loft of an IFI parish in Tarlac City on Oct. 3, 2006. His body was discovered bathing in blood from seven stab wounds.

“A few days after he was killed, the police of Tarlac City and Tarlac province ruled out that what happened was ordinary theft and homicide,” said Fr. Jonash Joyohoy, who led the National Priest Organization of the IFI, at the sidelines of a Saturday rally in front of IFI Sto. Niño Cathedral on Taft Avenue, Manila.

“The church conducted its own investigation and found that the Obispo Maximo was a victim of extrajudicial killing, one of several hundreds at the time,” he said.

The authorities did not exhaust all the angles, Joyohoy explained. “The police investigators did not interview the family of the bishop, the priests of the Diocese of Tarlac. If these people were interviewed, they would have learned that the bishop has for so long been receiving threats through text messages.”

The IFI believes that the murder is connected to the bishop’s involvement in the Hacienda Luisita strikes.

“The Tarlac City church is near the Hacienda Luisita. After the 2004 massacre there, the church has often become a venue for meetings,” Joyohoy said. “When he was killed, it was just a year after one of his priests, Fr. William Tadena, was killed. There was then a threat that a bishop will also be targeted.”

Father Tadena was killed on March 13, 2005, after celebrating Mass at an IFI chapel in La Paz town, Tarlac. The gunman is reportedly in the National Bilibid Prison for a case other than the priest’s murder, of which he is acquitted.

Both members of the IFI clergy visited the picket line of the Hacienda Luisita workers and solicited for their sustenance, Joyohoy said. “For us in the IFI, that connection is obvious.”

According to Fr. Dindo Ranojo, soon to be installed bishop of the Diocese of Tarlac—the first diocesan bishop since Ramento—the parish in Tarlac City is not a very secure place.

“The killer may have entered the church through a window. That would have been very easy,” he said. “The church there has not been in good shape in 2006. He just wanted to stay there because it was the one nearest to Hacienda Luisita.”

Since the Obispo Maximo died, he said, the Tarlac City parish had stopped hosting Masses, because parishioners feared for their lives. It now regularly hosts meetings of the women of the IFI so they can clean the place up.

Father Ranojo said plans were underway to pool funds for the repair of the church, so it could host regular Masses, especially on the 10th anniversary of Ramento’s murder.

The rally preceded a Mass attended by members of the IFI, including youth from Guagua, Pampanga. In attendance, too, were other denominations under the National Council of Churches in the Philippines, such as the United Methodist Church, the United Church of Christ in the Phillippines and the Episcopal Church in the Philippines. 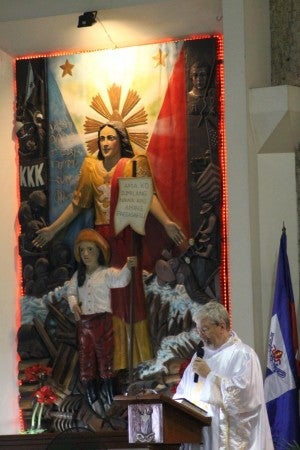 In the crowd were representatives from the World Council of Churches, the Church of Sweden and the Old Catholic Church in Union with Utrecht (OCC).

In a sermon during the Mass, OCC’s Fr. Franz Segbers explained why Bishop Ramento was being called a “martyr.”

“Bishop Ramento and many other right defenders are an icon of a poor Church for the poor that Jesus wanted,” he noted. “When these persons who defend the rights of the poor are honored with the Christian designation of ‘martyr,’ then we are striking out at the scandal of staying silent. The victims will not remain nameless. They are dignified by name.”

The IFI dedicated to Ramento, known as the “Bishop of the Poor, Peasants and Oppressed,” a human rights ministry—the Ramento Project for Rights Defenders.

Some of those at the rally come from the Samahang Manggagawa ng Golden Fortune Construction, who believe they’ve been fired from their jobs because of unionism. They are supported by the ministry in his name.

He was also active in the peace process and other human rights’ issues. Thus, the rally also touched on the recent extrajudicial killings in Mindanao, including of the Manobo in Surigao del Sur.

“We affirm that life is sacred, but under this government life becomes so cheap,” said banners held by some priests in the rally. They called on the Armed Forces of the Philippines to stop Oplan Bayanihan, which they said was responsible for the formation of the paramilitary forces that allegedly killed the “lumad.”

“What are we going to do when killing is that easy? As the conscience of the people, we should conduct reminders like this because government is not listening. We are all becoming victims,” said Obispo Maximo Ephraim Fajutagana.

The murder of both Bishop Ramento and Father Tadena occurred during former President Gloria Macapagal- Arroyo’s time, but Obispo Maximo Fajutagana said extrajudicial killings were still being carried out with impunity in the current administration.

The Tarlac and Negros dioceses, which were both vocal against issues in local azucareras, also conducted a commemoration on Saturday.

IFI parishes across the country and abroad commemorated Ramento’s death on Sunday, said the IFI Central Office. Other activities in connection with the anniversary will also be conducted across October. Vaughn Alviar/RC