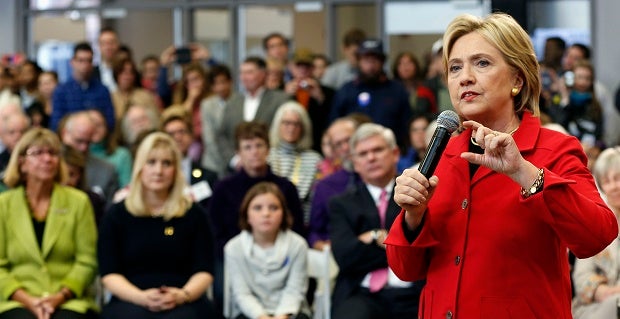 MANCHESTER, New Hampshire — Presidential candidate Hillary Rodham Clinton offered an emotional plea Monday for tougher gun control laws in the wake of a deadly university shooting, decrying the “extremism” that she said has come to characterize the debate over US gun laws.

Clinton, the front-runner for the 2016 Democratic presidential nomination, vowed to tighten regulations on firearms buyers and sellers with a combination of congressional and executive action.

Jumping into one of the most divisive issues in US politics, Clinton has made strengthening gun laws a centerpiece of her presidential campaign following a series of mass shootings in the past few months. The latest shooting left nine people dead at a university in the northwestern state of Oregon on Thursday.

During an appearance at a campaign town hall, Clinton veered between sadness and anger, accusing her Republican opponents of “surrender” to a difficult political problem.

“This epidemic of gun violence knows no boundaries, knows no limits of any kind,” she told the crowd of several hundred. “How many people have to die before we actually act, before we come together as a nation? It’s time for us to say we’re better than this.”

Clinton was joined by the mother of a 6-year-old victim of a 2012 school shooting in Newtown, Connecticut. After that shooting, which killed 20 children and six educators, President Barack Obama tried and failed to push legislation through Congress that would have tightened background checks for firearms purchasers.

Clinton said there was little “new” and “nothing unique” about her plans — aside from her determination to take action.

Her campaign rolled out a robust set of proposals Monday, including using executive action as president to expand background check requirements. Under current federal law, such checks are not required for sales made at gun shows or over the Internet.

Efforts to require such comprehensive background checks have failed several times in recent years in Congress, where Republican leaders have shown no willingness to even hold votes on efforts to curb access to guns.

Clinton also proposed repealing legislation that shields gun manufacturers, distributors and dealers of firearms from most liability suits, including in cases of mass shootings.

While Clinton’s Republican rivals have condemned the Oregon attack, most were also quick to declare their opposition to stricter gun laws to address mass shootings.

Her plan strikes a contrast with her closest primary rival, Sen. Bernie Sanders. While Sanders has wooed the Democratic base with his liberal positions on issues of income inequality, he’s struggled to defend a more mixed record on gun legislation that reflects his rural, gun-friendly home state of Vermont.

Oregon shooter rants in manifesto about having no girlfriend