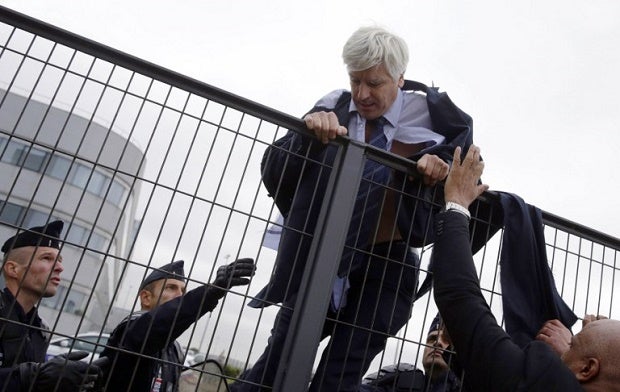 Air France’s director of long-haul flights, Pierre Plissonnier, nearly shirtless, is helped by security and police officers to climb over a fence, after several hundred employees stormed into the offices of Air France, interrupting the meeting of the Central Committee (CCE) in Roissy-en-France, on October 5, 2015. Air France-KLM unveiled a revamped restructuring plan on October 5 that could lead to 2,900 job losses after pilots for the struggling airline refused to accept a proposal to work longer hours. AFP PHOTO

PARIS, France—Air France-KLM’s human resources manager was “almost lynched” Monday by striking workers, who stripped him of his shirt in a protest over the ailing airline’s plan to cut 2,900 jobs.

Hundreds of workers stormed the airline’s headquarters at Charles de Gaulle airport outside Paris, forcing the meeting to be hastily abandoned.

Seven people were hurt, including a security guard who was knocked unconscious and was being treated in hospital, Air France said.

Human resources manager Xavier Broseta “was almost lynched,” according to one union delegate, and had his shirt ripped off as he clambered over a wire fence to safety, helped by security guards.

Another executive, Pierre Plissonnier, who is responsible for the long-haul flight division, had his shirt and jacket torn in the scrum.

CEO Frederic Gagey also made a hasty exit, and the board said the meeting would not resume on Monday.

The management condemned the “physical violence,” and said it would file complaints with the police.

Prime Minister Manuel Valls, on a visit to Japan, said of Monday’s events: “The company is in a difficult situation, but nothing justifies such attacks.”

The loss-making airline, which employs 52,000 people, is struggling to compete in the face of fierce competition from global rivals.

It had tried to convince pilots, who earn up to 250,000 euros ($280,000) a year, to fly 100 more hours a year for the same salary, but talks broke down last week with pilots saying the plan amounted to an effective pay cut.

The French government, which owns a 17.6-percent stake, has criticized the pilots’ “hard-line” stance in the past.

Officials at the French employers’ federation MEDEF were appalled at Monday’s scenes and said they would harm France’s reputation.

“It is really terrible for the company and for the country,” a MEDEF source said, asking not to be named.

The unions also condemned the “outbursts of violence.”

In a statement Monday evening they called on the Socialist government to arbitrate a deal that would “guarantee a future for the company.”

‘Spectators to a crash’

Three unions called a nationwide strike to coincide with Monday’s meeting. It was not clear how many staff were taking part, but the airline said flights would be unaffected beyond some check-in delays.

Not all staff support the pilots, who also led a record-long strike a year ago that cost the company nearly half a billion euros.

“Ground staff, stewards and hostesses feel they have made enormous efforts without ending up in a position to influence decisions,” Beatrice Lestic, of the CFDT union, told Le Parisien newspaper.

“They are now spectators to a crash in which they will be the first victims,” she said.

Seeking to sharpen its competitive edge against main European rivals Lufthansa and British Airways-Iberia, the management’s new proposals include cutting five long-haul routes, reducing the frequency of other flights, and selling 14 planes over the next two years.

Although the company says it favors voluntary departures, Gagey has indicated compulsory redundancies may be necessary for the first time to increase productivity.

Sources at Monday’s meeting said the plan includes the possibility of dismissing 300 pilots, 900 air hostesses and stewards, and 1,700 ground staff.

Pilots were also behind a record-long two-week strike in September 2014, which knocked 416 million euros off turnover and was described as “catastrophic for the French aviation sector” in a joint statement from unions.

Air France, which merged with Dutch national carrier KLM in 2004, is trying to save 1.8 billion euros over two years.

A source told AFP Monday that as part of its cost-cutting plan, Air France is to enter into discussions about cancelling all or some of the Boeing 787s it has on order.

The source said: “We are going to contact our suppliers from tomorrow to ask them if possible to cancel the scheduled delivery of the 787 planes.

“Discussions will be open

ed and they could end in cancellations, that’s our approach.”