Taytay lures back traders who made other LGUs rich 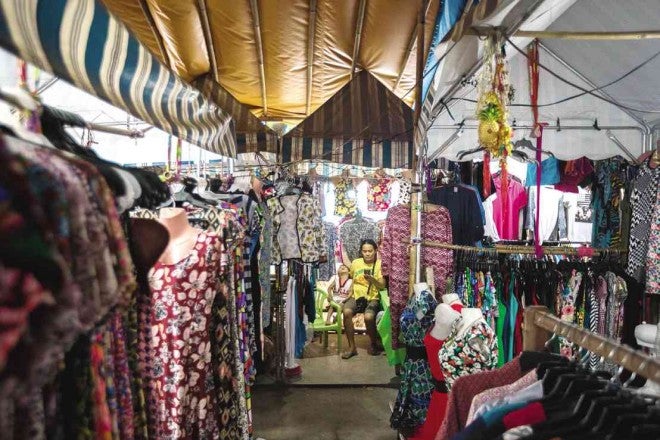 DRESSED FOR LGU SUCCESS. The Taytay municipal government claims the title “Garments Capital of the Philippines,” but it started capitalizing on this homegrown industry only last year through a project that recently earned the Galing Pook Award for good governance. At the center of the project is the setup of a flea market to attract dressmaking talents who have their workshops in Taytay but sell their products in other cities. JILSON SECKLER TIU

At the crack of dawn, Nilda Funilas was already up and about to peddle clothes she herself had designed and sewn. The mother of five had to make the daily trip from her workshop in Taytay, Rizal province, to a rented stall in Kalentong, Mandaluyong City.

The payoff for the early riser could vary from P10,000 on a good day to a mere P700 when sales are down—the latter just enough to keep her business afloat and augment her husband’s income as a mechanic.

But that was how she used to ply her trade. Today, 59-year-old Funilas is just one of the dressmakers in Taytay who no longer have to be daily “viajeros,” thanks to a program that recently earned the prestigious Galing Pook Award which recognizes best practices among local government units (LGUs).

Gina de Leon-Pineda, head of the municipality’s Public Employment Services Office, explained that while dressmakers in Taytay have home-based shops, they mostly end up paying relevant business fees and taxes to other cities where they go to sell their products.

At the core of the project was the setup of a “tiangge” or flea market that not only promotes Taytay-made clothes but provides retailers and consumers “a more conducive place” to conduct business.

Mayor Janet de Leon-Mercado said that because of the initiative, many members of the Baclaran Association of Garment Vendors and Producers Inc.—who are from Taytay—came back to the municipality to set up shop at the tiangge on Don Hilario Cruz Avenue.

Among the reasons why the businessmen agreed to relocate was the local government’s promise of technical assistance and security, the mayor said.

For buyers to continue patronizing them despite the change of marketplace, the local government has continuously improved the surrounding infrastructure. Lighting projects, for example, were undertaken on the roads and highways leading to the tiangge.

According to Mercado, roughly 38,000 families in Taytay are into dressmaking, making it the ‘’Garments Capital of the Country.”

Since the program was implemented to tap into this underground economy, Pineda said, the municipality saw a surge in the number of registered sellers. From only 400 in 2013, it rose to 4,000 this year.

With this increase, fees and taxes collected from the revitalized merchandising sector thus rose from P75,000 to P409,400.

In terms of job generation, Pineda said that from 3,960 individuals employed in the local garments industry in 2012, up to 36,310 are now counted among its work force.

Now that they have achieved their initial goal of “luring back” their dressmakers and retailers to Taytay, the next objective is to transform and promote the municipality into a shopping mecca with a small-town charm but with the variety and bargain prices of a Hong Kong, Mercado said.

As to “returnees” like Funilas, doing business without having to wake up so early and making that arduous trip to another city definitely has benefits. For one, she said, she can now spend more time coming up with new dress designs.

Her latest inspiration, in fact, was a cut she saw being worn by Maine “Yaya Dub” Mendoza, the popular character in the smash-hit “Kalyeserye” of noontime show “Eat Bulaga.”

She expressed hope that with the coming holiday season, more customers—including her own frequent buyers in Kalentong—would follow her to Taytay and rediscover her town as a shopping destination worth the trip.

The Galing Pook Award comes with a plaque and a cash prize of P100,000 for the wining local government.