Tolentino gets flak for ‘surprise gift’ at LP event

STA. CRUZ, Laguna—It was definitely easier to set some men’s pulse racing than it was to make Metro Manila traffic go any faster, Metropolitan Manila Development Authority (MMDA) Chair Francis Tolentino must have thought when he brought three skimpily clad women to a Liberal Party (LP) event and birthday celebration in this province on Thursday.

The trio, known as The Playgirls, provided unexpected and, some say, lewd entertainment at the mass oath-taking of about 80 local officials from Laguna’s fourth congressional district, who had opted to join the ruling LP.

The noontime event, led by LP standard-bearer Mar Roxas, coincided with the 58th birthday celebration of Laguna Rep. Benjie Agarao, who also marked his 40th year in government service on Thursday, at his sprawling residence in Barangay (village) Patimbao.

To spice up the otherwise uneventful gathering, The Playgirls performed a sexy number and twerked on stage in front of the cheering crowd that included children and college students.

The dancers, who were clad in boyleg panties and cropped tops, were a “surprise gift” from Tolentino, according to the emcee.

“I actually asked them to wear skirts,” Tolentino, one of the LP’s possible senatorial bets, said in jest. The MMDA chief arrived at the oath-taking shortly before Roxas delivered his speech.

Roxas was apparently unaware of The Playgirls’ presence as he was having lunch with Agarao and other local LP members when the 30-minute show started.

Contacted by the Inquirer about the incident, Tolentino, who briefly watched the dancers before he left, denied he brought the group to the event.

“I was just a guest at the birthday party. I did not bring any dancer or singer. The emcee probably got misinformed,” Tolentino said in a text message to INQUIRER.net. 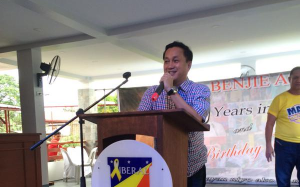 After doing a sexy dance number to the tune of “Twerk It Like Miley,” the performers asked for male volunteers to join them in parlor games filled with sexual innuendos.

“We’re looking for three gentlemen to join us. Don’t worry. You will surely enjoy what we’ll do,” said one of the dancers, who introduced herself as “Playgirl Rio.”

One by one, members of the female dance group asked their male partner to stand behind them as they playfully did the twerk, a sexy dance move that involves suggestive hip back thrusts that was popularized by American teen singer Miley Cyrus.

At one point, one of the Playgirls asked a male volunteer, who was probably in his 50s, to lie down. She then went on top of him and gyrated as the crowd burst into boisterous laughter.

The two other Playgirls did the same to their respective partners, with one of them thrusting suggestively a few inches away from the man’s face.

While many in the male-dominated crowd were amused by the show, others expressed dismay over the risque dance numbers.

“They should have held this in private or at night because there were children around,” said Angela Baladad, one of Agarao’s scholars who attended the event.

“It was demeaning for us women to watch those girls providing that kind of entertainment in front of men,” a 57-year-old village councilor told the Inquirer.

Speaking with reporters later, Agarao claimed Tolentino did not bring the girls to his birthday party. “Somebody might be trying to destroy Tolentino’s name,” the lawmaker said. “The girls were not a gift from him.”

He did not know that the girls were performing sexy dance numbers, said Agarao who watched the show briefly with his son, Laguna board member Benjo Agarao, after seeing off Roxas and his companions.

“I did not know about [the show]. I would have ordered them to stop had I seen it,” Agarao said. 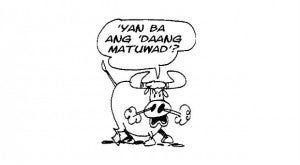 But in a phone interview with reporters later, the lawmaker had an apparent change of heart, saying he “(saw) nothing lewd” about the show.

“It depends on how you appreciate things. Like me, I’m a real man, I see nothing lewd. In Manila, some [women] dance in cages. In other provinces, your eyeballs will fall out and yet there is no malice. Here in Metro Manila, a lot of congressmen [watch these shows] until dawn,” Agarao said.

“They danced in public. We have a different culture here. If there is malice, then I’m in trouble,” he added.

“If it’s true, it’s in bad taste, and a bad move. Why should Tolentino do such a thing?… It doesn’t make sense to me to send that gift with so many congressmen [around]. Unless they’re really good friends. Even I wouldn’t do such a thing,” Belmonte said.–With a report from Gil C. Cabacungan