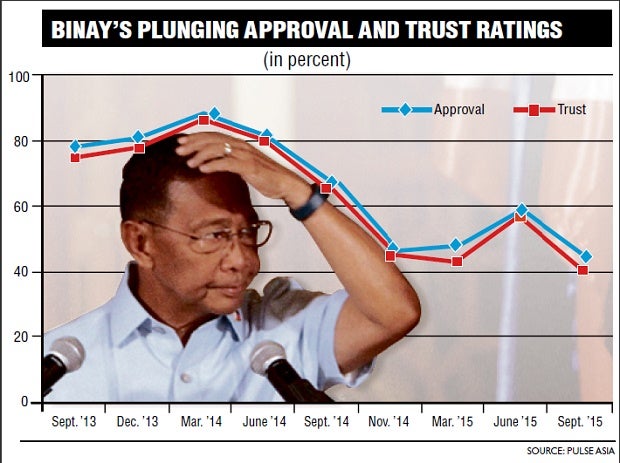 The double-digit drop in Vice President Jejomar Binay’s trust and approval ratings in the latest Pulse Asia survey has something to do with his leaving the Cabinet of President Aquino and declaring himself leader of the opposition, Malacañang said on Thursday.

Communication Secretary Herminio Coloma Jr. noted that “this is the first survey where he is no longer a member of the Cabinet and has instead declared himself leader of the opposition.”

“It is reasonable to expect that the change in his status from Cabinet member to leader of the opposition is reflected in the public perception of performance or satisfaction rating,” Coloma told reporters.

The presidential candidate of the United Nationalist Alliance, Binay resigned from the Cabinet in June and started attacking the Aquino administration.

He vacated his posts as presidential adviser on overseas Filipino workers’ concerns and chair of the Housing and Urban Development Coordinating Council.

The Vice President also let go of his positions as chair emeritus of the Inter-Agency Council against Trafficking and head of the Presidential Task Force against Illegal Recruitment.

From 57 percent in June, Binay’s trust rating plunged 18 points to 39 percent in September, his lowest level over the past 20 quarters.

His approval rating dropped to 43 percent, down 15 points from 58 percent in June.

The survey, which used face-to-face interviews with 2,400 respondents, was conducted from Sept. 8 to 14. It had a margin of error of plus-or-minus 2 percentage points.

Coloma noted that previous surveys reflected the public’s opinion on Binay’s performance as a member of the Cabinet during the past five years.

The latest Pulse Asia survey also found that only the President obtained a majority approval rating among the country’s top five officials.

“We thank our bosses, the Filipino people, for expressing their continuous trust and confidence in the leadership of President Aquino,”  Coloma said.

Binay wanted to know the questions asked in the Pulse Asia performance and trust ratings survey.

“If it was a question of performance, that meant what have I done in those months. But it was a wrong question to ask,” he said in an interview on Thursday.

“How will you ask about my performance? I have no job (in the past few months),” he said.

Binay said he was working on his own initiative whenever overseas Filipino workers asked for his help. “But I am no longer with the NHA (National Housing Authority), Pag-Ibig and other key shelter agencies.”

Binay said that was the reason he was criticized by the Makati Business Club (MBC) when it said the Office of the Vice President was the worst-performing agency. “But I had accomplished a lot of things at the time, especially with the Pag-Ibig.”

The MBC in its Executive Outlook Survey in the second semester of 2015 rated the Office of the Vice President as the worst-performing government agency.

Binay’s camp also noted that during the Pulse Asia survey period, the Senate blue ribbon subcommittee ordered the arrest of 11 individuals due to their failure to attend hearings on the allegations of corruption against the Vice President.

At the same time, a Senate resource person claimed that several alleged dummy firms of Binay received most of the P5.6 billion worth of contracts for security, janitorial and IT services of the Makati City local government over the past decade.

“I am thankful that despite the Senate inquisition and the intensified campaign of lies and pattern of deceit against me, our kababayans’ faith in me remain steadfast and undiminished,” Binay said.

His camp pointed out that his strength lay in the provinces. “He is thankful for the big plurality to near majority approval and trust ratings that he got from the different regions and classes,” said his spokesman Rico Quicho.–With a report from  Inquirer Research