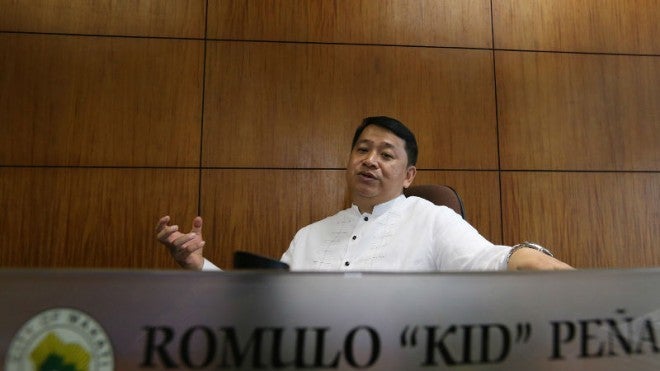 Acting Makati Mayor Romulo “Kid” Pena is facing a graft complaint over the alleged overpricing of the birthday cakes being distributed to senior citizens in the city. INQUIRER PHOTO

Acting Makati City Mayor Romulo “Kid” Peña has been sued for graft before the Office of the Ombudsman over alleged overpriced birthday cakes for senior citizens.

Binay, the son of Vice President Jejomar Binay, was suspended for six months pending the Ombudsman’s investigation for graft over the alleged overpricing of Makati City Hall Building II and the Makati Science High School building.

The Goldilocks cake is cheaper at P280 per piece compared to that of Timstate/Bakerite at P306, but consumers get to eat more portions in the cakes supplied by Binay, Brillante said.

Still, Peña awarded an P8.666-million contract to Goldilocks for the supply of 31,187 cakes for senior citizens for the period of Aug. 15 to Dec. 31, Brillante said.

Brillante alleged that the cakes supplied by Peña were overpriced by P3.036 million.

“The contract for the cakes of Makati senior citizens was overpriced by P3,036,337 or 35 percent higher than what Makati City was paying under suspended Junjun Binay’s previous contract prior to Peña’s assumption as acting mayor,” Brillante said in a statement.

“The amount of overprice, thus the gross disadvantage to the city government, is equivalent to at least 35 percent of the total bid price offered by Goldilocks. Peña’s act of entering into a contract grossly disadvantageous to the City of Makati constitutes a violation of Section 3(g) of the Republic Act 3019 (or the Anti-Graft and Corrupt Practices Act) for which he should be liable,” he added.

Brillante said the Goldilocks cakes do not conform to the specifications of the contract. Pictures submitted to the Makati social welfare department showed that the cakes were only eight inches in diameter and less than two inches in height, he added.

The cake-giving program started in 2003 when Vice President Binay was still Makati mayor. The cakes under the Vice President’s term in Makati were supplied by Millennium Food Chains Corp., where, according to the Anti-Money Laundering Council (AMLC), his children—Senator Nancy, Makati Representative Abigail, and Mayor Junjun—were founding directors. Former Makati Vice Mayor Ernesto Mercado alleged that Millennium served as a dummy for the Binays. The Binays denied the allegations.

The AMLC found the link between the Binays and the cake supplier in its inquiry report which ordered the freezing of their 242 bank accounts and their alleged fronts in the course of the Ombudsman’s investigation on the alleged graft activities in Makati. Marc Jayson Cayabyab/RC