With the City Hall still locked down by the police, Peña spoke to reporters in the lobby of the nearby Makati City Hall Building II.

“I can’t touch [Binay’s] office. Maybe we will talk, and then I will choose what my office will be. But I want my office to be seen near the entrance, and as the people enter City Hall, they will see my face. I’m already sweating a lot,” he said.

According to Peña, barangay (village) officials and City Hall employees could “expect (him) to be part of the continued improvement of services” in the city.

“In the next weeks, I will ask and hold a dialogue with all sectors of our society. (With) our businessmen, religious groups, nongovernment organizations and others that I didn’t mention, so that I can hear your voices, your thoughts, what you want changed in Makati, so that we can be more effective, and our services will be recognized as the best in the entire country,” he said.

According to Peña, senior citizens could also expect him to be “loyal” and “open to [their] needs.”

He said it was “time” to thank them “from the heart” for the “long period and efforts” they have given to “rejuvenate” Makati.

“The service and benefits for you, we will bring to your houses so that you don’t become tired of going to the covered court and of enduring the heat of the sun,” he said.

“We will try to get cakes from Red Ribbon or Goldilocks. It’s because those have receipts so if ever the people ask, there are declared receipts immediately,” he said, laughing, when asked if senior citizens would continue to receive cakes on their birthdays.

Sen. Nancy Binay has been accused of being the supplier of overpriced birthday cakes for senior citizens in the city. 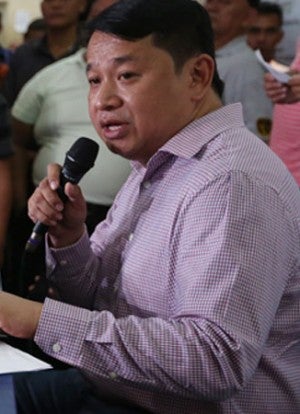 FINALLY IN CHARGE Vice Mayor Romulo “Kid” Peña takes over as acting Makati mayor after Mayor Junjun Binay, suspended by the Ombudsman, vacated his office. Peña was not able to serve as acting mayor last March when the Ombudsman suspended Binay in connection with another case because the latter got a temporary restraining order from the appellate court. NIÑO JESUS ORBETA

Peña said he would also “prioritize” the “silent majority” staying in their homes, waiting for services.

“I am looking at them and that is my priority, to reach all of them to show that even if Makati is known to be a progressive city, many still need help,” he said.

Asked when operations would normalize in the city, Peña said:

“Maybe we should give way to this day. But later on we will hold a meeting already, in case the (new) City Hall is cleared. We will give different directives, many have said and it’s only right that we follow the law.”

Peña said he had written a letter to Councilor Virgilio Hilario asking him to assume the position of acting vice mayor.