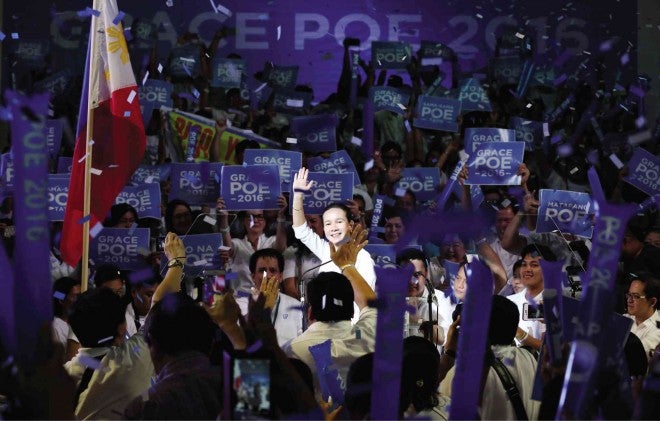 The survey results also showed that each island group in the country has its own preferred presidential bet: Senator Grace Poe is the leading choice of respondents from Metro Manila (26 percent) and Luzon (31 percent); Roxas leads in his hometown Visayas (34 percent); while Duterte is the top choice for Mindanaoans (29 percent).

At 22 percent, Poe is also the most preferred presidential aspirant across socio-economic classes, followed by Roxas, Duterte then Binay.

Respondents in the survey answered the question: “Of the people on this list, whom would you vote for as President/Vice President of the Philippines if the 2016 elections were held today and they were candidates? You may mention others not included in this list.”

The survey was conducted from September 8 to 14 with 2,400 respondents with a ± 2% error margin and 95 percent confidence level.

Poe also led the survey for preferred vice presidential bets as 24 percent of respondents said that they would vote for her if elections were conducted during the survey period.

She is statistically tied with her running mate, Senator Francis Escudero, who was picked by 23 percent of the respondents.

Meanwhile, Nacionalista Party bets were able to secure third and fourth places on the list: Marcos got 13 percent while Cayetano got nine percent.