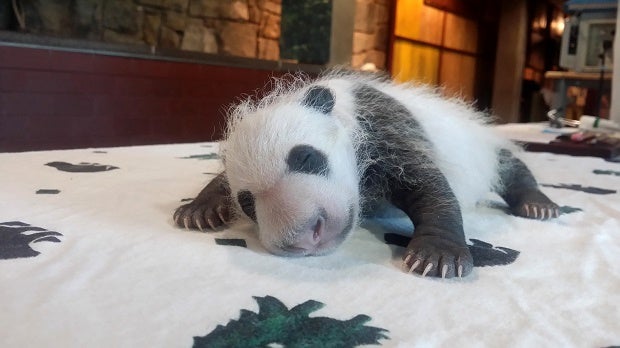 Michelle Obama and her Chinese counterpart, Peng Liyuan, revealed the name Friday during a tour of the panda house at the Smithsonian’s National Zoo.

The first ladies chose the name and untied a pair of yellow scrolls to reveal it in both English and Mandarin Chinese, with help from two third-graders from a Chinese-immersion elementary school in the nation’s capital. Just before revealing the name, the spouses watched Bei Bei get a medical checkup.

The zoo is a favorite of her family, Mrs. Obama told the audience of American, Chinese and Smithsonian officials.

“My daughter, Malia, has done several internships here and comes here often, even though you don’t know it. She is a fan,” the first lady said. “She can now operate under cover, so she comes and goes and you don’t even know it. We are grateful for everything you do to make this a national treasure.”

Bei Bei, who turns 5 weeks old on Saturday and now weighs about 3 pounds (1.3 kilograms), is the survivor of a pair of twins born Aug. 22 to Mei Xiang. The second cub died four days after its birth.

With the cub, the zoo has four pandas for the first time, including Tian Tian, the father of Bao Bao and Bei Bei.

Panda keepers at the National Zoo and at the China Conservation and Research Center for the Giant Panda in Wolong, Sichuan Province, each contributed one name for consideration. Bei Bei was submitted by the Chinese. The cub will be sent to China to live after he turns 4.

Peng spoke of the affection Americans have for pandas and quoted Mrs. Obama for having said the bears serve as a common bond between two countries that disagree sharply on other issues.

“We do need more bonds to bring the people of our two countries ever more closer,” Peng said through an interpreter. “And I think giant pandas are exactly one of those bonds that we can celebrate to achieve that goal.”

China gave a pair of giant pandas to the National Zoo in 1972 following President Richard Nixon’s groundbreaking visit to the Asian country. Ling-Ling and Hsing-Hsing lived out their lives at the zoo. The current pair of adult pandas, Mei Xiang and Tian Tian, arrived in 2000.

Another of the couple’s surviving cubs, Tai Shan, lives in China.

Before the announcement, Tian Tian and Bao Bao appeared in their outdoor yards, with Bao Bao thrilling the audience by toppling a panda-friendly frozen cake set out for her as a treat.