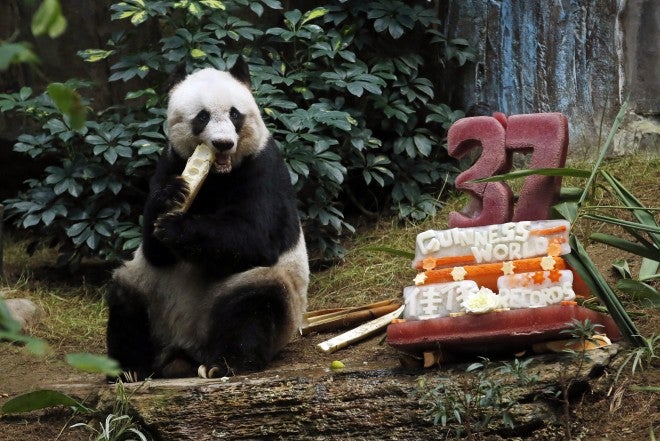 Giant panda Jia Jia eats bamboo next to her birthday cake made with ice and vegetables at Ocean Park in Hong Kong, Tuesday, July 28, as she celebrates her 37th birthday. Jia Jia broke the Guinness World Records title for Oldest Panda Living in Captivity” on Tuesday. AP

HONG KONG—The oldest giant panda ever in captivity tasted a vegetable ice cake and, of course, bamboo in celebration of her 37th birthday.

Jia Jia was recognized Tuesday as holding two Guinness World Records, the oldest ever and the oldest living giant panda. Her mate, An An, also marked a birthday, his 29th.

Born in 1978, Jia Jia was sent to Hong Kong Ocean Park with An An in 1999. They were given by China to mark the second anniversary of Hong Kong’s handover.

Jia Jia had six babies and four are still living.

The park’s veterinary service director, Paolo Martelli, says typical panda life expectancy is around 20 years, and only eight of about 400 living in captivity today are older than 30.

So, he says, “it’s quite exceptional to reach such an old age for a panda.”

Jia Jia’s age is equal to about 110 for humans. She suffers high blood pressure and arthritic pain, though her health is stable.

Read Next
INQUIRER.net poll: Most Filipinos pleased with Aquino’s last Sona
EDITORS' PICK
Smart three-peats as country’s fastest mobile network – Ookla
Would the military allow me to stay this long if I’m inutile? – Duterte
In good spirits: SMDC helps farmers and residents through Kadiwa Market
Pre-order the new vivo Y20s [G] to get a free TWS earphone
65% of Filipinos say Duterte’s health should be made public – SWS
DSWD chief admits ‘slow start’ in distribution of aid in ‘NCR Plus’
MOST READ
Vico Sotto frets getting photos of ‘butt vaccination’ from Pasig dwellers
Metro Manila to have shortened curfew hours from 8 p.m. to 5 a.m. under MECQ
San Miguel Corp. continues to invest heavily in the Philippines’ future
COVID-hit Roque slams ‘un-Christian’ query on how fast he secured hospital bed
Don't miss out on the latest news and information.