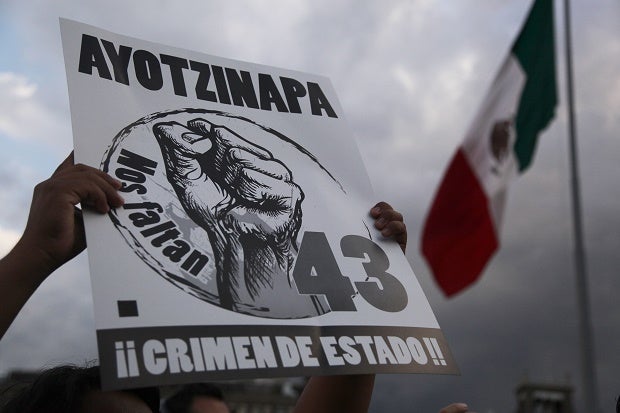 A person holds a sign that reads in Spanish “Ayotzinapa, we are missing 43. A crime by the state!” during a protest for the 43 missing students from the Isidro Burgos rural teacher’s college in the Zocalo, Mexico City’s main square, Thursday, Sept. 24, 2015. President Enrique Pena Nieto told the families of 43 students who disappeared a year ago in southern Mexico, that he would create a new special prosecutor for all of the country’s thousands of missing people. AP

MEXICO CITY — President Enrique Pena Nieto told the families of 43 students who disappeared a year ago in southern Mexico during a meeting Thursday that he would create a new special prosecutor for all of the country’s thousands of missing people.

Eduardo Sanchez, the president’s spokesman, told reporters after the closed-door meeting that the families had presented eight demands and that Pena Nieto had instructed his Cabinet to analyze each and get back to them.

Sanchez said after the meeting that there was not a clear timeframe for when the demands would be answered, but that it would be done promptly.

“Again and again we ask ourselves how could we trust again in an institution that tricked us,” the families wrote in the letter delivered to the president.

Sanchez said Pena Nieto told the families: “We’re on the same side. You and I are looking for the same thing.”

After the meeting, Mario Gonzalez, whose son is among the missing students, pointed out that what the government once held up as a “historic truth” about the disappearances, it now calls a hypothesis.

“What guarantee do we have that this new investigation won’t be more theater?” Gonzalez said, surrounded by other parents in Mexico City’s central plaza. “We’re not going to give up; we’re going to continue searching.”

Vidulfo Rosales, a lawyer representing the families, said they “totally reject” the creation of a special prosecutor for all of the country’s missing. He said the case of the 43 missing students requires its own special prosecutor.

Pena Nieto did not agree to any of the families’ demands and the only commitments he offered were ones they had already heard, Rosales said.

The students disappeared Sept. 26, 2014, in the city of Iguala. They had gone there to commandeer buses that they wanted to use to attend a commemoration in Mexico City. The federal government has said local police from Iguala and the nearby town of Cocula illegally detained the students and turned them over to the local drug gang Guerreros Unidos, which then allegedly killed them and incinerated their remains. The families have never accepted that version.

The government has said that it has identified two of the students from the burned remains recovered from a river in Cocula.

A team of international experts sent by the Inter-American Commission on Human Rights, which spent six months reviewing the government’s investigation, found a number of shortcomings and points of concern. Specifically, it concluded the bodies of 43 students could not have been burned at the garbage dump in Cocula as the government maintained.