Escudero: Poe a natural-born Filipino; I won’t take her place 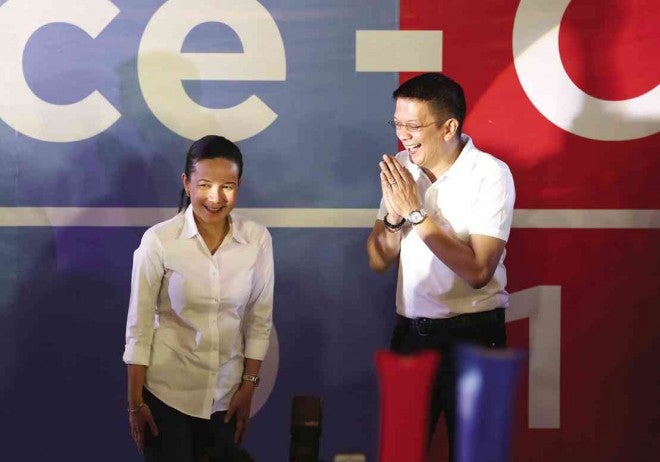 THE MAN BEHIND GRACE An elated Sen. Francis Escudero joins Sen. Grace Poe onstage on Thursday at Club Filipino, where she named him her running mate in the 2016 elections. Poe announced her presidential bid a day earlier at Ang Bahay ng Alumni in UP Diliman, Quezon City. The anticipated team-up drew a strong mix of show biz and political personalities. NIÑO JESUS ORBETA

While confident that Senator Grace Poe would not be disqualified from the presidential race, her running mate, Senator Francis “Chiz” Escudero made it clear this early that he has no plans to take her place and run for the highest post instead.

Escudero said that in the first place, he was confident that Poe would be allowed to run for president next year, despite a disqualification case filed against her at the Senate Electoral Tribunal (SET) over questions raised on her citizenship.

“I don’t see that happening quite frankly,” Escudero said on Tuesday when asked during a Pandesal Forum in Quezon City about the possibility that Poe would be disqualified from joining the 2016 elections.

“Kapag nakapag-file na po hindi na po pwedeng mag-file pa para sa ibang pwesto neither are you qualified to be a substitute and I have no plans of doing that.”

(Once you’ve filed, you can’t file for any other position neither are you qualified to be a substitute and I have no plans of doing that)

(For one simple reason, I am confident that Sen. Poe will overcome the case against her at the SET, [questioning] her qualification either as a senator or as president and her plan to file her certificate of candidacy)

Escudero also dismissed speculations that he would end up running alone in 2016.

“I’m confident that she will not be disqualified, that she will be allowed to run and at the end of the day the people will decide on this issue,” he said.

Escudero, who was a former member of SET, insisted that Poe is a natural-born Filipino, contrary to the opinion of the tribunal’s chairman, Associate Justice Antonio Carpio.

But the senator noted that during Monday’s oral arguments at the SET, the lawyers of the complainant, Rizalito David, admitted that they did not have evidence to prove that Poe was indeed a naturalized citizen.

Escudero also disagreed with the opinion that Poe should first identify her biological parents to find out her citizenship.

(Again I disagree, if Senator Poe already knew her parents, then she is no longer a foundling, but an abandoned child.)

The senator also pointed out that under the Constitution, natural-born Filipinos are citizens of the Philippines from birth without having to perform any act to acquire or perfect Filipino citizenship.

(Did Senator Poe do anything to be issued a Philippine passport when she was younger? No, she did not. She did not go to the court to be declared a Filipino. There is also no act of Congress of a Republic Act that says she’s a Filipino, therefore she’s a Filipino, and a natural-born one at that.)

Besides, Escudero said, it should not be Poe who should prove that she is a natural-born Filipino but the petitioner, who alleges otherwise.

(Why should we leave it to a child, abandoned in a church, the responsibility to prove that she is a Filipino and identify her parents? She was abandoned so she does not know [her parents ]. There’s no foundling who does not want to know her biological parents) Maila Ager/IDL