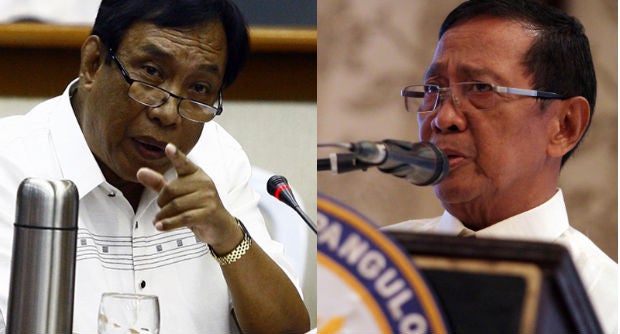 The nine-page complaint filed at the Makati Prosecutor’s Office on Friday sought to prove that Mercado was “lying when he maliciously, falsely and feloniously accused the Vice President of extorting condo units from developers amounting to 60-70 percent of all the condo buildings in Makati,” Binay’s legal counsel Claro Certeza said in a statement.

“This claim has been publicly belied by the developers themselves. It only shows that Mercado is a pathological liar and has zero credibility,” he said.

The former vice mayor during a Senate blue ribbon subcommittee hearing in November 2014 told senators that Binay owns various condominium units under the name of individuals whom he had used as dummies.

In the Vice President’s complaint-affidavit, he claimed that Ariel Olivar—whom Mercado accused of being Binay’s dummy for his alleged unit in The Peak Tower—admitted that he received his instructions from Mercado himself.

Olivar, an engineer, said during a Senate hearing on January 22 that he was asked by Mercado to use his name as the owner of a 150-square meter unit in The Peak condominium in Makati allegedly owned by Binay.

He admitted that he never met Binay and it was Mercado who gave him the instruction.

“The series of libel complaints filed by the Vice President shows his commitment to answer and refute the accusations against him in the proper forum in accordance with the rule of law,” Certeza said.

The Binay’s camp said the unit under Olivar’s name is the same as the unit where Mercado’s former live-in partner, Racquel Ambrosio, was found dead in 2002. Niña P. Calleja/RAM

Read Next
Will raps vs MILF rebels over SAF deaths affect peace process?
EDITORS' PICK
Smart celebrates all kinds of ‘#SimplyLove’ for Pride Month
Duterte to issue memo on face shields this week
Smart brings KCON:TACT especially 4U to subscribers from June 19 to 27
Gilas out to prove Korea win not a fluke; Tab fires back at ‘lucky shot’ remark
DOH reports 40 more COVID-19 variant cases
Young, Huerter help Hawks upset top seed Sixers in Game 7
MOST READ
Duterte to issue memo on face shields this week
No plot to oust Pacquiao as PDP-Laban president in July meeting — Nograles
Probe troll farms, lawmakers urge
Año: Drug war to be effective no matter who next leaders are
Don't miss out on the latest news and information.