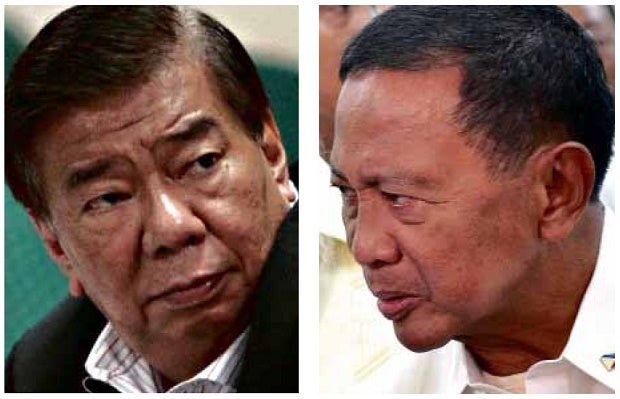 Vice President Jejomar Binay: I have other important things to do
Senate President Franklin Drilon: The Liberal Party is ready to face the presidential run of Poe. INQUIRER FILE PHOTOS

For Vice President Jejomar Binay, the prospect of Sen. Grace Poe being his rival in the 2016 elections is not a big deal.

“She can declare (her bid for President). What do you want me to say? As far as I am concerned, I am a candidate for President in the 2016 elections,” Binay told reporters on the sidelines of the Mining Philippines 2015 conference, which he keynoted on Wednesday morning.

Binay showed indifference to the news that Poe declared her presidential bid on Wednesday afternoon at Ang Bahay ng Alumni at the University of the Philippines, alma mater of both the Vice President and Poe.

He dodged the question about Poe posing a threat to his candidacy.

But the Vice President said he would not monitor Poe’s announcement. “I won’t be a hypocrite. I have other important things to do,” he told reporters.

The Liberal Party (LP), which is fielding Interior Secretary Mar Roxas as its standard-bearer in the 2016 elections, is ready to face the presidential run of Poe, Senate President Franklin Drilon said on Wednesday.

“They are all candidates and we will face them all because we are running under a platform of good governance, the daang matuwid [straight path],” Drilon said in a radio interview, when asked to comment on whether Poe’s run for the presidency would threaten Roxas’ own bid.

Drilon, the LP vice chair, said the party had a good platform of government in daang matuwid.

As to Poe’s camp, he said: “[W]here they will tread, that’s their problem.”

Poe announced Wednesday night that she was taking on the challenge of running for President.

She was expected to announce Sen. Francis Escudero as her running mate in the latter’s press conference Thursday.

Broadcaster Korina Sanchez, Roxas’ wife, said she was not afraid of Poe’s bid for the presidency.

Sanchez, who was at the opening of the 30th Negros Trade Fair at Glorietta Activity Center in Makati City, was asked if Poe’s entry was a threat.

She told the Inquirer that the Roxas camp was not threatened by Poe’s entry in the presidential race because it believed her husband had the best qualifications to lead the nation.

“We’re kind of relaxed because I think it’s just all about believing in your brand and, being his wife, of course I’m biased. I think he (Roxas) is the best person and the best brand,” she added.

Sanchez said no one could beat 30 years in governance.

Saying Roxas is an Ilonggo, she added, “I guess that’s good enough reason to put back a Visayan in Malacañang. It’s about time.”

Reminded that Poe also has Ilonggo roots, Sanchez replied: “But he can speak Ilonggo. She cannot. You also have to count the number of visits over the years (to Negros). Between all the candidates and by far, Mar is a sure winner.”

The mothers of Roxas and Poe—Judy Roxas-Araneta and Susan Roces—are both from Negros Occidental province.

Drilon said that he had long told his party mates to prepare because Poe, the front-runner in recent presidential surveys, was gunning for the presidency and that the party should stop courting her to be Roxas’ running mate.

The Senate President said the party would likely know who would be Roxas’ running mate by the end of the month, as the latter was continuing to talk to prospective vice presidents who include Camarines Sur Rep. Leni Robredo, Batangas Gov. Vilma Santos and Sen. Alan Peter Cayetano.

Marañon said he did not believe Poe’s entry into the presidential race would affect Roxas’ chances of winning.

“(Roxas) is the most experienced, is brilliant and has been in government for a long time with not a single taint of corruption to his name. He is very transparent,” the governor said.

Marañon said Poe’s decision to join the race would only strengthen Roxas’ resolve to work for his victory. In the end, he added, Roxas will win.

“Politics is local and the Liberal Party is the most organized down to the grassroots level,” he said.

“Does Grace Poe have that organization up to the precinct level?” he asked.

“Right now all that the Grace Poe group is banking on is really popularity. But if people just make a habit of asking what the credentials of the candidates are, then I’m pretty sure that Mar will outrank all the other candidates by a mile,” he said.

Recto, who is reported to be jumping to the Poe-Escudero camp, welcomed “Senator Grace’s courageous move to submit her application letter for the highest officer in the land.”

“That she will present a preview of her platform would hopefully be the cue that the run-up to 2016 will be marked by a serious discussion of issues and away from the pettiness of gutter politics,” he said in a statement.

“I wish her good luck and Godspeed—the same sincere tidings I would convey to my seatmates in the chamber—Senators Ferdinand Marcos Jr., Antonio Trillanes IV, Escudero and Cayetano—when it is time for them to submit their reported application letter for the vice presidency as well,” Recto said.

Even if he said the political situation would somehow clear with Poe finally announcing her bid for the presidency, Marcos said he had yet to decide whether to run for higher office as the possible running mate of Binay or to seek reelection.

Marcos said he would still have to consult with his party, the Nacionalista Party of former Sen. Manuel Villar Jr., this week.

“I have nothing new to tell you… I see elements that are still unclear,” he told reporters, who asked him about Binay’s statement that he was 85 to 90 percent sure of his vice presidential candidate.

Asked whether he was in touch with Binay, Marcos said not personally but through “intermediaries” whom he was in constant communication with.

Bautista said it was the party that was by Estrada’s side “in his recent political activities.”

“We believe that the politics of Erap will somehow be seriously considered,” Bautista told reporters on the sidelines of a media forum in San Juan City.

In recent interviews, Estrada said he was caught in a dilemma—whom to choose among the three presidential contenders he would support.

The former President noted that Roxas was a very good Cabinet member during his short-lived presidency, Binay was a close friend and Poe his godchild and the daughter of his bosom friend—the late movie actor Fernando Poe Jr. (FPJ).

Estrada is believed to be more inclined to endorse the candidacy of Poe as he wasn’t able to personally campaign for the presidential bid of FPJ in 2004 because he was then incarcerated for the crime of plunder.

Apart from endorsing and campaigning for the junior senator’s run for Malacañang, Bautista said there were “many ways” Estrada could return the favor to FPJ.

“Paying back to FPJ is more a matter of ensuring the memory of FPJ will always be in the minds of Filipinos,” he said, which he added Estrada has been doing.

Bautista pointed out that Binay has always been by Estrada’s side through all his political fights, as well as FPJ’s till the end.

“There was not a single instance that Binay left him. Where should the payback be?” he said, adding that he hopes Estrada would make a “political decision which would benefit the country.”—With a report from Jovic Yee

Drilon on Grace Poe’s presidential bid: ‘I told you so’