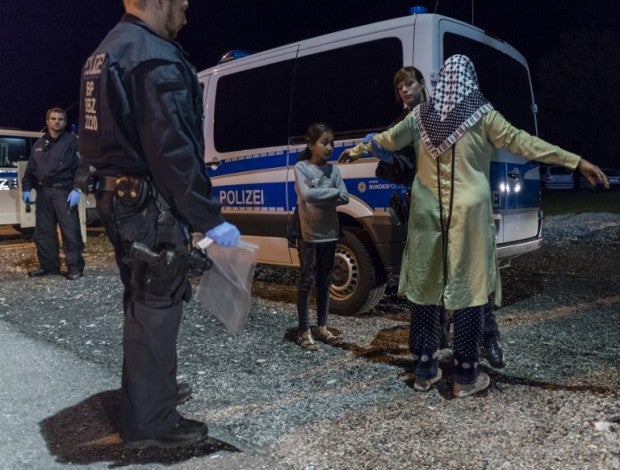 A policewoman controls a refugee mother and her daughter at the German-Austrian border near Piding, southern Germany, on September 14, 2015. After admitting that its capacity in the refugee crisis had been stretched to the limit, Berlin reintroduced identity checks on people traveling from the passport-free Schengen zone, and essentially announced an end to its open-doors policy to Syrians. AFP PHOTO

But just as suddenly, Berlin announced a complete U-turn, saying Sunday it was reinstating border controls and abiding by asylum rules that it had essentially waived for Syrians.

The authorities, admitting that capacity had been stretched to the limit by the tens of thousands of new arrivals, called for a return to a more orderly situation.

Analysts on Monday derided the abrupt move, with the left-leaning Tageszeitung calling it an “absurd about-turn,” and conservative Die Welt questioning whether “the German refugee policy had really been well thought through.”

“Angela Merkel risks undoing the very impression she has been basking in for the past few days—of an unbureaucratic, caring Germany, showing up the restrictive policies of other EU countries,” Tageszeitung wrote.

Merkel’s foreign detractors also gloated at her government’s change of heart, with Henri Guaino, a former aide of ex-French president Nicolas Sarkozy, jumping on the opportunity to criticize her plan to welcome 800,000 refugees.

And Nigel Farage, the leader of Britain’s anti-migrant party UKIP, tweeted: “By shutting border with Austria, is clear that German government have realised the scale of their error.”

For about two weeks, Merkel and her allies had boldly insisted that they could keep the crisis under control.

Riding on a wave of euphoria that also helped mobilize thousands of volunteers to join in the country’s biggest post-war refugee relief effort, cabinet ministers sang from the same hymnsheet.

But reality on the ground soon caught up.

Local authorities particularly in the prosperous and conservative southern region of Bavaria have been complaining for months that they were struggling to handle the record inflow of migrants.

When the steady influx suddenly turned into a huge wave of 20,000 people arriving over a weekend in the regional capital Munich, an open rebellion erupted within Merkel’s own conservative camp, with her Bavarian allies at the CSU calling her policy a monumental disaster.

The head of the CSU, Bavarian state premier Horst Seehofer, said opening German borders to unprecedented numbers of migrants “was a mistake that will occupy us for a long time.”

“We are getting ourselves into an emergency situation we soon won’t be able to control,” he told news weekly Der Spiegel.

Seehofer went as far as to invite Hungary’s controversial Prime Minister Viktor Orban, who has come under fire over what activists described as inhumane treatment of refugees, to his party’s upcoming congress to “jointly search for a solution.”

Questions also arose over the identities of migrants flowing into the country, with the CSU’s vice president Hans-Peter Friedrich saying it was “completely irresponsible to allow thousands of people to enter without checking and registering them, and one can’t really estimate how many IS fighters or Islamists are among them.”

“For the chancellor, this is a miscalculation of the kind she has not experienced in the last 10 years,” wrote Sueddeutsche Zeitung’s Stefan Kornelius.

Faced with the mounting backlash, Merkel sent her interior minister to announce the dramatic U-turn on Sunday.

“No one can fault Germany with regards to its welcoming culture,” said Thomas de Maiziere, hours after he announced the reinstated passport controls.

But “we cannot have the situation where someone who is supposed to be taken in by a neighboring state of Germany says, ‘I prefer to go to Germany.'”

“Sharing means sharing. And that must be implemented,” the minister told public television ARD.

The Berliner Zeitung was more forgiving, saying that even Merkel’s opponents had no solution for the refugee crisis.

“Let’s use the time gained to better organize the reception of refugees, and to define Germany’s humanitarian possibilities and limits—and not for a pointless ‘I told you so’ debate,” it said.

Seen from the outside, however, the change appeared to be a tactic to pressure other European allies to share the refugee burden fairly.

Switzerland’s TagesAnzeiger said in its editorial that it is a “signal for the EU… to come to a fair distribution of refugees.”

“Germany will not and cannot solve the refugee crisis alone.”