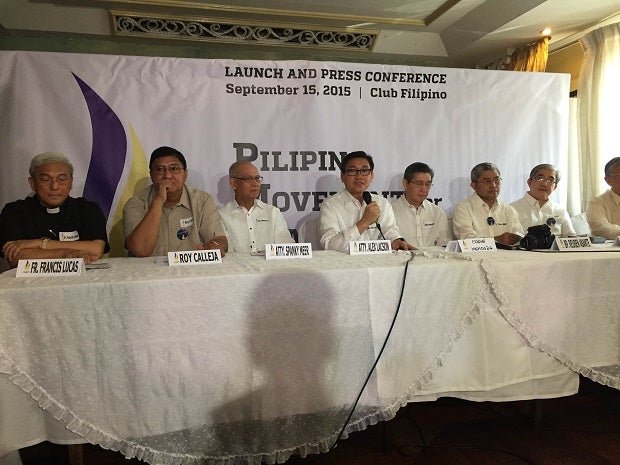 Leaders from different faith-based groups from the Roman Catholic, Christian and Evangelical churches led the launch of the Pilipino Movement on Transformational Leadership on Sept. 15 at Club Filipino. Photo by Aries Joseph Hegina/INQUIRER.net

Leaders and supporters from faith-based groups such as Catholic, Christian and Evangelical communities gathered on Tuesday to launch a movement seeking to endorse and campaign “honest and incorruptible” national leaders for the 2016 elections.

The movement, called Pilipino Movement for Transformational Leadership (PMTL), seeks to campaign for leaders for 2016 elections who are embodying the qualities that the movement prescribed in a scorecard named “Gabay Kristo.”

Atty. Alex Lacson, the lead convenor of the PMTL, said that Tuesday’s gathering is a “golden opportunity” for faith-based groups to unite in choosing the country’s next leaders.

“It is a golden opportunity because it is very difficult in bringing unity (among) big organizations in the Catholic, Christian and Evangelical community to perform an election-related activity together,” Lacson said.

Lawyer Spanky Meer said the PMTL marks the first time in history that the said three religious communities will “come together in a united front.”

The Gabay Kristo is composed of 20 questions and offers a criteria on the qualities of leaders such as “Karakter at Karangalan,” “Kakayanan at Abilidad,” “Katapatan sa Diyos at Kapwa,” and Katotohanan sa Pamumuno at Pamunuan.”

Lacson said that the Gabay Kristo is expected to reach 10 million people, citing the number of members of organizations which joined the PMTL. He hopes that the guide will help voters reach informed choices come 2016 polls.

Aside from launching the “Gabay,” the PMTL also explained how members of the religious groups under its wing will be able to nominate leaders whom it will campaign in next year’s elections.

Through the “People’s Choice,” an entity different from PMTL, the different church groups belonging to the PMTL can nominate candidates for the presidency, vice presidency and the senate who they deem worthy of their vote.

The candidates should also adhere to the three-fold reform agenda being pushed by the PMTL: poverty reduction, job creation, and good governance.

After crafting a shortlist of nominees, the candidates will then be invited to present their platforms before PMTL member-groups.

“Winners” will then be declared and they will be the ones who will enjoy a surge of support from the different faith-based groups.

Meanwhile, fears of “bloc-voting” were quelled by the organizers as members are still free to choose non-nominated candidates.

“We do not compel them. We have to respect the free will of the person,” Lacson clarified.

The “People’s Choice” is set to release the names of its nominees by October 16, the last day of the filing of certificates of candidacy for 2016 polls. Aries Joseph Hegina/RAM