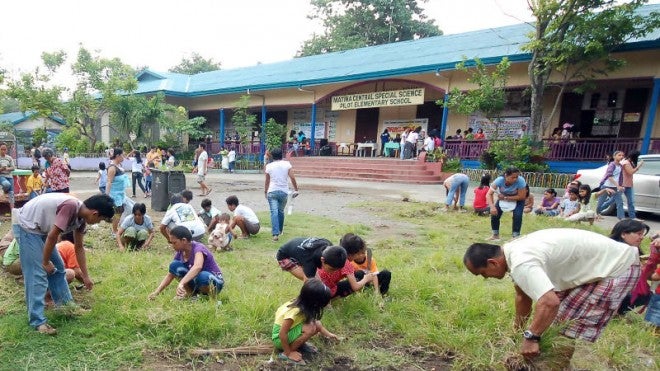 OVERCOMING ADVERSITY Parents, pupils and teachers clean up the campus of Matina Central Elementary School in Davao City at the opening of the school year as part of a program called “Brigada Eskwela” to involve communities in the education of the young. BING GONZALES/INQUIRER

Instead of cursing the darkness, William Moraca improvised and lit up a mountain village in General Santos City.

He also devised a scheme that diverted water from a stream to Klolang Elementary School and its host community.

What the 46-year-old school administrator accomplished was nothing short of a miracle in an impoverished region without the two basic needs in this day and age, but he did it.

The name of the game was ingenuity, initiative and perseverance.

Moraca invented an improvised windmill using a ventilator which could generate power of up to 24 volts. On a windless day, the lone solar panel he had set up on top of the school building becomes the alternate source of electricity in the classrooms and 40 huts in the village.

The initiatives of the educator have not passed unnoticed, even in Thailand.

Next month, Moraca, along with 10 other Southeast Asian teachers, will receive the Princess Maha Chakri Award. It is named after the Thai princess who celebrated her 60th birthday in April and honors “highly dedicated teachers in Southeast Asia whose accomplishments make significant contributions to education and human development.”

According to the award body’s website, the princess herself has worked over the last three decades on the “education and development of children and youth, especially in marginalized and remote areas.”

The situation in Klolang, before Moraca’s initiatives, reflected conditions in at least 5,900 public elementary and secondary schools with 1.1 million students without electricity.

To install the facilities in Klolang, Moraca had to make a personal loan of P20,000.

“If I wait for the DepEd to fund our needs here in the mountainside, nothing will happen,” Moraca said in a recent TV interview.

Assistant Education Secretary for Planning and Development Jesus Mateo last week told the Inquirer that providing a water supply was not the job of the DepEd but that of the Local Water Utilities Administration. In areas without water facilities, the schools are designed to have a rainwater catchment basin for its toilets, he said.

Mateo said the DepEd was closely coordinating with utility companies for schools to have water connections, especially for those who only relied on rainwater.

He also said that the DepEd was not tasked to provide electricity in schools. He pointed out though that on-grid schools, or those within an area where electrical connection is available, were being given access to the service by the National Electrification Administration. They number 2,400.

For off-grid communities, the DepEd launched in July the LightEd PH campaign, which “aims to provide solutions to schools and homes that have no power through conventional and alternative sources of energy.”

The absence of water and electricity in public schools aren’t just the only problems besetting the country’s education system, which is set to fully implement next year the K-12 reform program with the opening of the senior high school.

Among the problems outlined by the Alliance of Concerned Teachers (ACT) in June were the country’s shortage of more than 57,000 teachers and 112,000 classrooms.

Mateo said that for this year alone, more than 32,000 teacher items had been approved by the Department of Budget and Management. Of this number, he said that around 70 percent had been filled up.

He noted that the hiring process, from recruitment, selection and appointment of teachers, had significantly been reduced from a period of 14 months then to only three months now.

The education official said that the fast-tracking of the process could be attributed to their initiative of limiting the number of days a particular stage in the hiring process should be resolved.

When it comes to classrooms, Mateo admitted that there was a delay in its construction activities last year since they had to wait for the new design of school buildings, following the onslaught of Supertyphoon “Yolanda” (international name: Haiyan) in November 2013.

“Rather than build immediately, we made sure that what we’re building will be calamity-resilient, hence the delay,” Mateo said.

The DepEd this year is building 41,700 classrooms nationwide, on top of the more than 86,000 classrooms built from 2010 to 2014, he said. The DepEd has also requested funds for the construction of around 27,000 classrooms for the senior high school program, he said.

Another problem is the textbooks that students use. Apart from having delays in its distribution, as claimed by the ACT, textbooks used in public schools have been put in the limelight because of its being error-filled, as pointed out by self-styled textbook critic Antonio Calipjo Go over the last two decades.

Mateo said that the DepEd had enlisted a team of academicians, experts from colleges and universities and professional associations to conduct a review of the textbooks.

“Errors cannot be avoided in any book,” he said, adding that the DepEd was taking “appropriate measures to address” the problem.

The latest book that Go critiqued and found to contain around 1,300 errors was the Grade 10 English learner’s material, “Diversity: Celebrating Multiculturism (sic) through World Literature.” The DepEd said that the copy that Go had reviewed was the book’s first draft.

Mateo said the copies of the corrected version of the book, which bears the new title “Celebrating Diversity through World Literature,” were distributed to Manila students on June 19.

A quick check of the draft copy of the book showed that on page 37, a Greek mythological story was titled, “The Gordon’s Head.” On the updated copy, it had been updated to its correct title, “The Gorgon’s Head.” While certain corrections have been made, some of the errors pointed out by Go remain in the updated copy.

Mateo clarified that the DepEd didn’t incur additional expenses for the printing of the corrected book since “the errors have been spotted and have been revised even before the book was mass produced.”

To his knowledge, Mateo said that there were no undelivered textbooks. If there is, he said, it will be given to the schools “within the year.”

He pointed out that those who had yet to have their copies could download the digital version of the book through the agency’s Learning Resources Management and Development System website.

Mateo believes that the education system in the country, once assailed by the late University of the East dean Josefina Cortes for producing “a nation of fifth graders,” has improved in some ways because of the various reforms introduced, such as the K-12 program.

“We need to focus more on the reforms made. You can’t expect a reform to have immediate results. It will take a long time,” Mateo said.

He added that alongside the introduction of the K-12 program was the need to improve processes, such as “the strengthening of teacher hiring,” on which he said the DepEd has “put emphasis on merit and fitness” as prescribed by the Civil Service Commission.

As the DepEd begins to defend its P436.5-billion budget proposal in Congress, the biggest in the Aquino administration’s proposed P3.002-trillion national budget for 2016, the public awaits how this huge amount of taxpayer money can greatly improve the country’s education system.

Much indeed is still needed to be done for students and even teachers like Moraca, who is more than willing to do his part to the extent of shelling out his own money to deliver the type of quality education every Filipino student deserves and is entitled to.

A losing battle to improve textbooks