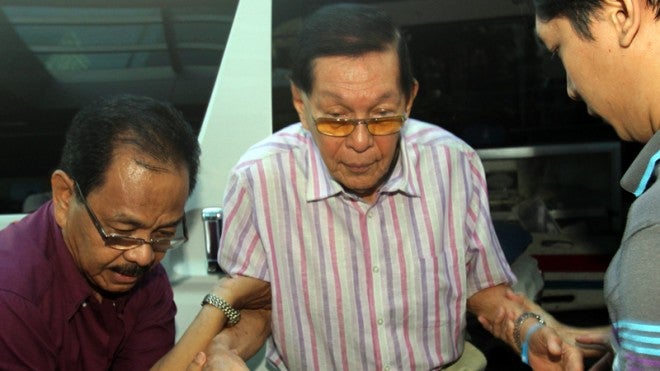 Whatever happened to the “truckload” of evidence?

In a stunning turn of events, government lawyers on Monday admitted their failure to show proof in the Sandiganbayan that Sen. Juan Ponce Enrile pocketed P172-million as kickback for his supposed role in the P10-billion pork barrel racket allegedly drawn up by suspected mastermind Janet Lim-Napoles.

The startling admission of the prosecutors from the Office of the Ombudsman during the oral summation of Napoles’ yearlong bail hearing caught off guard even the three justices of the antigraft court’s Third Division, who grilled them on the quality of the evidence they had presented.

Napoles is currently serving a life term at the Correctional Institute for Women in Mandaluyong City for illegally detaining primary whistle-blower Benhur Luy.

Enrile, on the other hand, was released from hospital detention in Camp Crame on Aug. 18 via a controversial ruling of the Supreme Court, which approved the 91-year-old senator’s bail plea on humanitarian grounds.

Like several of its previous court appearances to prosecute the government’s case versus Enrile et. al, the prosecution fumbled and faltered anew in the penultimate hearing of Napoles’s bid to secure provisional liberty.

Lanee David, another Napoles lawyer, expressed confidence that the alleged brains of the scam would be granted bail.

“The prosecution did not present evidence, but mere allegations, conjectures and suppositions against the accused,” David said.

Buoyed by the snowballing public sentiment against the graft-ridden pork barrel system then, the Department of Justice brought plunder and graft charges against more than 60 individuals, including Enrile and fellow opposition Senators Bong Revilla and Jinggoy Estrada, in the Office of the Ombudsman in September 2013.

Revilla’s own petition for bail had been denied by the antigraft court’s First Division while Estrada’s motion for temporary liberty is still pending in the Fifth Division. They had been detained at the Philippine National Police Custodial Center in Camp Crame since June last year.

Levito Baligod, Luy’s former counsel, said then that a truckload of documents would be presented to the Ombudsman to back up allegations that billions of pesos in public funds intended to help poor farmers and typhoon victims were siphoned off to Napoles’ bogus foundations in exchange for kickbacks for incumbent and former legislators.

But after presenting 29 prosecution witnesses during Napoles’ bail hearing, which started in August 2014, the prosecution conceded that it could not deliver the goods against Enrile.

Quizzed by Associate Justice Samuel Martires, State Prosecutor Edwin Gomez argued that Enrile should be held liable for plunder for consenting to the alleged misuse of nearly P345 million of his Priority Development Assistance Fund (PDAF), the official name of the pork barrel.

Citing the testimonies of Luy and other government witnesses, Gomez said the senator authorized Reyes to act on his behalf by assigning his PDAF allotments to Napoles-controlled nongovernment organizations (NGOs).

The witnesses had told the court that Enrile’s kickbacks were collected by his “agents,” among them socialite Ruby Tuason, her husband Butch Tuason, lawyer Freddie Villamor and Tet de Joya.

Not a centavo of proof

“Were you able to show proof that Senator Enrile received even a single centavo from the P172 million which Napoles allegedly gave as kickbacks?” Martires asked the prosecutor. “Do you have proof that Reyes gave the money to Enrile?”

After briefly conferring with his fellow prosecutors, Gomez replied: “None as of this moment for the purposes of this bail hearing.”

Presiding Justice Amparo Cabotaje-Tang, the chair of the Third Division, and Associate Justice Sarah Jane Fernandez were seen smiling while reporters who had been covering the bail hearings of PDAF scam-related cases were heard murmuring upon hearing Gomez’s reply.

Gomez said Enrile “chose not to personally” receive his commissions, but allowed Reyes, Tuason and his other agents to get these for him.

But Martires noted that none of the prosecution witnesses gave any testimony that Reyes delivered the money to Enrile.

Tang also said that while Tuason herself admitted she had delivered P30 million in cash to Reyes only once, the witness declared that she did not personally meet with Enrile to deliver his purported commissions.

However, Gomez argued that the plunder law held that public officials who “directly and indirectly” amassed at least P50 million in ill-gotten wealth could be indicted for plunder.

But Martires told him, “You have to have proof that (Enrile) received the money through other persons.”

The magistrate also asked the prosecution why only Enrile, Reyes, Lim, Napoles and De Asis were indicted for plunder while most of their coaccused were only named in the graft case.

Prosecutor Manuel Soriano explained that Enrile et. al were charged with plunder since their acts were committed before the “agreement” to commit plunder was made while those named only in the graft case participated only after such an agreement had been reached.

Tang, however, pointed out that the “agreement to commit a conspiracy” was not a crime in itself since the offense had yet to be consummated.

“We believe that Senator Enrile is not yet off the hook because he’s a conspirator. The crime of plunder could not have been committed without Enrile’s participation,” Gomez maintained. “He knowingly participated in the commission of the crime of plunder.”—Marlon Ramos