Damascus to Berlin; a Syrian family’s escape to new life 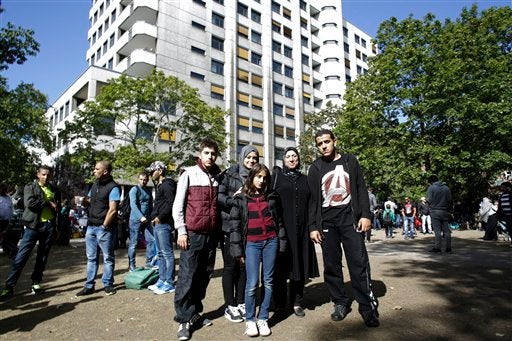 In this photo taken on Tuesday, Sept. 8, 2015, from left, Syrian refugees Yaman Habashieh, Reem Habashieh, Khawla Kreem, Mohammed Habashieh and Raghad Habashieh, in front, pose for a photo in at the central registration center for refugees and asylum seekers LaGeSo (Landesamt fuer Gesundheit und Soziales – State Office for Health and Social Affairs) in Berlin. The family arrived in Berlin a week ago, five of the 37,000 who have flooded into Germany this month seeking a new life. AP

BERLIN — The Syrian family asks with wonder why they didn’t die like thousands of others like them: killed by bombs in their native Damascus; drowned by the rough waves of the Mediterranean; or suffocated in overcrowded trucks speeding them through Europe.

“Sometimes I wake up and I feel like, thank God, I’m alive,” says 19-year-old Reem Habashieh, who with her loved-ones survived a harrowing 16-day flight from Syria to arrive last week in Berlin — amazed they all made it. “I’m lucky, I’m a blessed person.”

Habashieh, her mother and three younger siblings are five of the 37,000 who have flooded into Germany this month. Now they’re embarking on another unknown journey, trying to start a new life in a country full of strange people, cold rain, unfamiliar smells and voices they don’t understand.

“We had to hide between the trees, run through sunflower and cornfields and walk all night,” Habashieh says, tucking in a loose tail of her gray woolen hijab. “There were scary animals, people were mean, we had to sleep under the sky — it was very dangerous.”

But excitement and youthful curiosity shine through as she describes her family’s arrival in Berlin — how she led her family on buses, subways and commuter trains through the capital, and organized essential first steps like registering to apply for asylum.

Raghad, Reem’s 11-year-old sister, a skinny girl with long brown hair and a big cheeky smile, got so tired along the way that Mohammed, her burly 17-year-old brother, sometimes had to carry her for hours.

Yaman, a lanky 15-year-old, dragged his feet on his own. He doesn’t talk much, seemingly still processing the experiences of the past weeks. 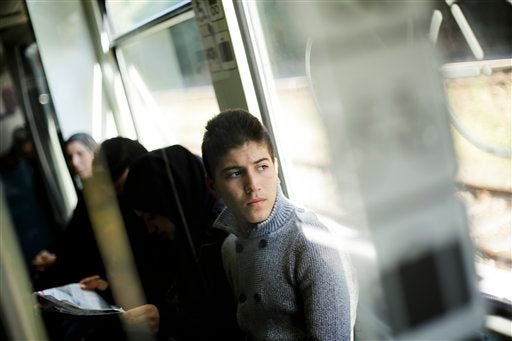 In this photo taken on Wednesday, Sept. 9, 2015, Syrian refugee Yaman Habashieh sits in a train with his family on their way from their temporary accommodation facility to the central registration center for refugees and asylum seekers LaGeSo (Landesamt fuer Gesundheit und Soziales – State Office for Health and Social Affairs) in Berlin. The family arrived in Berlin around a week ago, five of the 37,000 who have flooded into Germany this month seeking a new life. AP

Khawla Kareem, their 44-year-old mother, says she’s still exhausted from the odyssey, but that her maternal urge to bring her four children to safety filled her with the power she needed. Her husband died three years ago; being left alone to care for the children amid a brutal civil war led her to the difficult decision of leaving everything behind and fleeing Syria.

It was also three years ago that the war hit home, as the front line between President Bashar Assad’s Syrian army and the rebel Free Syrian Army came to the Damascus street they lived on — and they were literally caught in the crossfire.

“They kept fighting, bombs were falling, our house burned once, we rebuilt it,” Reem Habashieh, who studied economics at the university of Damascus, recounts in fluent English. “We were just saying that we are strong and that we can keep it on in Syria — but we can’t anymore.”

She remembers how life during the war simply stopped for them.

So earlier this year Khawla Kareem, an elementary school teacher, scraped together 12,000 euros ($13,400), selling the family car, and bought plane tickets to Bodrum on the Mediterranean Coast in Turkey. She paid traffickers to take them across the sea in a small rubber boat to the Greek island of Samos. Moments before they boarded, the smugglers told them to leave behind all of their belongings on the beach — laptops, clothes and precious objects carrying memories of their past life.

They took a ferry from Samos to Athens, then worked their way through Macedonia and Serbia into Hungary, where the mother hired another human smuggler. He spirited them across borders on his minibus with dark tinted windows and north to Berlin, dropping them off on the outskirts of the city last week.

Germany has said it expects some 800,000 migrants this year, and the government has said refugees from wars like Syria’s can count on having their asylum requests fast-tracked. Others, like migrants from Serbia, Kosovo or Romania, will likely be returned to their home countries, which Germany considers secure.

Challenges abound even for those, like the Hasbashiehs, who get to stay.

For five days, they have been standing in line, squeezed together with hundreds of other refugees outside the central registration point for asylum seekers in the German capital.

In the queue is a cross section of those who have shared their plight in recent weeks: young mothers hugging sick babies; a Syrian army defector wondering whether he should tell the truth about his military past; lonely, unattended teenage boys whose eyes are still filled with the terror they’ve been through.

They crowd under the maple trees on the city office’s dusty compound, pushing and shoving in one big line that slowly snakes its way into the gray high-rise building.

Some are from Syria, Iraq and Afghanistan, others from Eritrea and Sudan and still others from Albania, Montenegro, Kosovo and elsewhere. All came for a better life in Germany.

Their most important belonging right now is their “magic number” which will allow them to enter the building and finally register to file their application — when it’s eventually called.

The Habashiehs have been holding on to a small blue ticket numbered T00140 for five days, watching in vain so far for it to flash up on the black screen.

Some in line say they’ve been waiting two or three weeks for the overwhelmed German officials to finally attend to them.

Meanwhile, city and community officials have been working overtime and on weekends, and pensioners have come out of retirement to help process all the newly arrived migrants.

Residents also have come out in droves as the scene repeats itself around the country, bringing those in line food and drinks, donating toys and clothes and sometimes offering rooms in their private homes.

After the adrenaline-charged escape from Syria and nearly 4,000-kilometer journey, the slow bureaucracy now seems to take forever for the Habashiehs.

They have been lucky to get a room of their own in a former army barracks in Berlin’s western Spandau neighborhood, where they were put up with 1,600 other new arrivals.

Had they arrived just a few days later, they would have had to make do with cots under unheated white tents.

Until their asylum application is officially submitted, it’s hard to think ahead, not knowing whether they will stay in Berlin or be relocated elsewhere in Germany.

“We want to start our new lives, Raghad and Yaman want to go back to school, I really want to learn the new language,” Reem Habashieh says a little impatiently. She dreams of becoming a student at one of Berlin’s universities; her brother Mohammed wants to study information technology, then leave to work in one of the Arab gulf states.

Only their mother is a bit more cautious. She is relieved she managed to bring her family to Germany, saying it’s “a welcoming and helpful country for refugees and they respect the hijab and Islam here.”

But she pauses for a moment and then says quietly, “my heart will always be in Damascus.”