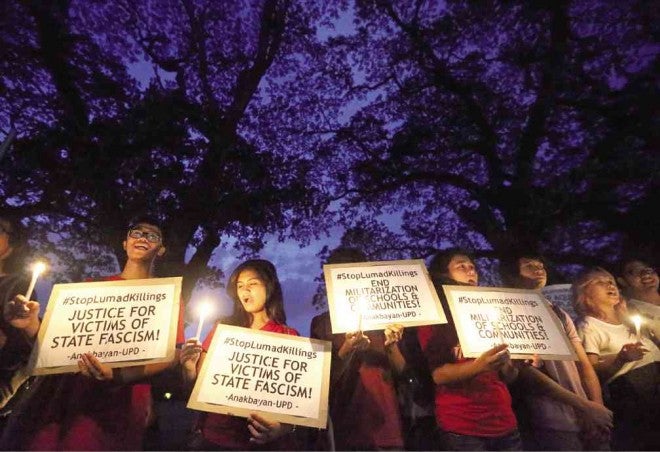 STUDENTS of the University Philippines Diliman call for an end to killings of indigenous peoples days after the execution by militiamen of Alcadev executive director and ‘lumad’ educator Emerito Samarca and two lumad in Lianga, Surigao del Sur province on Sept. 1. LYN RILLON

TANDAG CITY—Surigao del Sur Gov. Johnny Pimentel said the military has been pressuring him to tone down his statements about atrocities committed by paramilitary groups.

“I have received text messages from the military. Military officials have come to me, asking me to tone down or at least be neutral,” the governor said in an interview on Thursday night.

He refused to identify the military officials.

The militia killed Emerito Samarca, executive director of the Alternative Learning Center for Agricultural and Livelihood Development (Alcadev), a school for “lumad” children in the village of Diatagon in Lianga. After killing Samarca, the Magahat-Bagani herded the residents to a basketball court and executed lumad leader Dionel Campos and his cousin Aurelio Sinzo.

The military has denied it was behind the creation and operation of the lumad militia.

Pimentel said even before the Sept. 1 killings, he has repeatedly asked the military to stop tolerating the atrocities being committed by the Magahat-Bagani.

“They (military) did nothing. Then, this happened,” he said. “This is too much,” he added.

Pimentel revealed that during the Sept. 1 killings, government soldiers were at least a kilometer away from the area.

“Initially they denied they were there. But when I asked them again, they admitted that they were indeed there but did not intervene as people could have been caught in the crossfire,” he said.

Pimentel said the militiamen stayed in Sitio Han-ayan for two hours “and still the government soldiers, who were just a kilometer away, did nothing.”

At least 3,000 evacuees are now staying at the Surigao del Sur Sports Complex after they fled their homes in the hinterland villages of at least five towns in the province.

“Now the poor lumad are here (Tandag City) because the military did not act on my repeated request for them to disband this Bagani,” he said.

Pimentel also cited the operations of a militia in the town of Barobo as another example of atrocities being committed against lumad communities. The group, he said, has been going around tribal communities extorting money from residents.

“For the past six months, I have been asking the military to do something about the Bagani in Barobo town, but they have not acted on it. What’s the use of having the 75th Infantry Battalion there,” he said.

“Now they want me to tone down or at least be neutral. I will not retract my statement. I don’t regret having said that the military created a monster that it can no longer control,” the governor said.

Instead, Pimentel said, the military “should show its sincerity” by arresting Magahat-Bagani leaders Loloy Tejero, Bobby Tejero and Margarito Layno.

“Loloy and Bobby Tejero were the ones who killed Campos and Sinzo, while Layno was the one who slit Samarca’s throat,” he said.

If the military will still not act despite his repeated pleas and offer of cash rewards, the governor said he might resort to “asking the soldiers to move out of the area so I can send the police to go after these Baganis.”

“The military should disarm and disband this Magahat-Bagani,” the governor added.