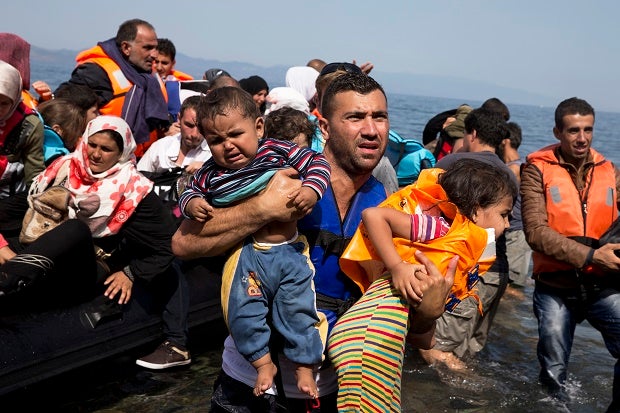 Syrian refugees arrive aboard a dinghy after crossing from Turkey to the island of Lesbos, Greece, Thursday, Sept. 10, 2015. The US is making plans to accept 10,000 Syrian refugees in the coming budget year, a significant increase from the 1,500 migrants that have been cleared to resettle in the US since civil war broke out in the Middle Eastern country more than four years ago, the White House said Thursday. AP

WASHINGTON — The United States is making plans to accept 10,000 Syrian refugees in the coming budget year, a significant increase from the 1,500 people who have been cleared to resettle in the US since civil war broke out in the Middle Eastern country more than four years ago, the White House said Thursday.

The White House has been under heavy pressure to do more than just provide money to help meet the growing humanitarian crisis in Europe. Tens of thousands of people from war-torn countries in the Middle East and Africa are risking their lives and dying en masse during desperate attempts to seek safe haven on the continent.

The refugees from Syria, however, would be people who are already in the pipeline and waiting to be let into the United States, not the thousands working their way through eastern Europe after landing in Greece. It was not immediately clear how admitting a larger number of Syrian refugees who are in the processing pipeline would help alleviate the crisis that European countries are grappling with.

White House spokesman Josh Earnest said about $4 billion that the administration has provided to relief agencies and others is the most effective way for the US to help shoulder the crisis, but that President Barack Obama has decided that admitting more Syrian refugees in the budget year that begins Oct. 1 would also help boost the US response.

About 17,000 Syrians have been referred over the last few years to the US for resettlement by the UN refugee agency. About 1,500 are in the US, with another 300 scheduled to be allowed in this month. That leaves about 15,000 Syrians waiting for the clearance process to conclude, according to the State Department.

Obama would like to admit 10,000 of those, according to Earnest’s announcement.

US State Department spokesman John Kirby also said the 10,000 Syrians will come from the pool of 17,000 people referred to the US by the UN agency.

Earnest said earlier this week that the administration has been looking at a “range of approaches” for assisting US allies with 340,000 people freshly arrived from the Middle East, Africa and Asia. Many are fleeing parts of Iraq that are under the Islamic State group’s control. The 1,500 Syrians who are resettling in the US represent a small percentage of the 11.6 million people who have been chased out of the country or uprooted from their homes due to the civil war in Syria.

US Secretary of State John Kerry told lawmakers Wednesday that the US will increase its worldwide quota for resettling refugees by 5,000, from 70,000 to 75,000 next year — and the number could still rise, according to two officials and a congressional aide who requested anonymity to discuss a private meeting.

Kerry said after meeting with Senate Judiciary Committee members that the US would increase the number of refugees it is willing to accept. He did not provide a specific number.

“We are looking hard at the number that we can specifically manage with respect to the crisis in Syria and Europe,” he said Wednesday.

Germany is bracing for some 800,000 asylum seekers this year.

Democratic presidential candidate Hillary Rodham Clinton, Kerry’s predecessor at the State Department, called for an “emergency global gathering” at the UN General Assembly meeting this month, where countries could pledge aid money and to accept some of the migrants.

House of Representatives Minority Leader Nancy Pelosi said Thursday that the US should increase the number of refugees it resettles next year by more than the 5,000 figure to help European countries, saying the figure suggested by Kerry “is far too low.” Pelosi said the US accepted far more refugees after the Vietnam War and could do so again.

Democratic Sen. Dick Durbin said he would be surprised if Pope Francis does not raise the refugee issue when he visits separately with Obama and members of Congress in two weeks. “We should be ready to respond,” Durbin said.

Rep. Michael McCaul, Republican chairman of the House Homeland Security Committee, sounded alarms about the potential for Islamic State militants to use the refugee situation to sneak operatives into the West. He also said the US doesn’t have the manpower to adequately investigate the background of every Syrian who wants to come to the US

Earnest said the safety and security of the US and its citizens would be a top consideration when deciding which refugees are let into the country.