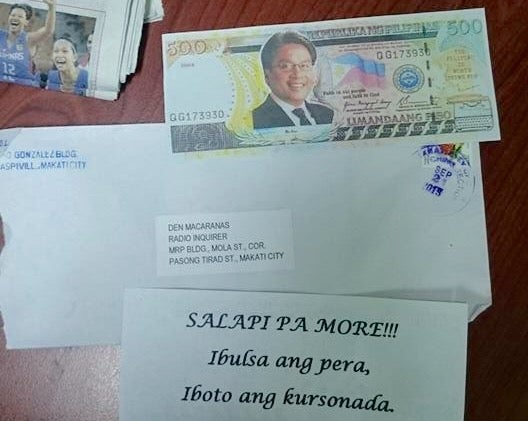 Interior Secretary Manuel “Mar” Roxas II wants the Philippine National Police and National Bureau of Investigation to find out who is behind the fake P500 bills bearing his face and being sent to the media.

One of the recipients of the envelope said the sender used the address “Gonzales Bldg., Jaspivill, Makati City.”

With Roxas’ face printed on the bill, the fake money also bears the line “Salapi pa more, ibulsa ang pera, iboto ang kursonada,” which is somewhat similar to an earlier statement of Vice President Jejomar Binay in one of his provincial sorties.

Despite the recent attack on Roxas, he said this would not affect his candidacy.

Meanwhile, Youth Against Crime and Corruption (Yacap) party-list Rep, Carol Lopez, a supporter of Roxas, said detractors of the ruling party’s standard-bearer in 2016 had been resorting to black propaganda as they were seeing Roxas’ advantage in the elections.

”It’s very evident that people are now resorting to black ops because they’re feeling Mar’s strength in the campaign. Otherwise, why else would they do that? Bakit ba sila takot kay Mar?” Lopez said in a statement to the media.

Roxas, the administration’s bet for the presidency, will be going against Binay in the elections. In 2010, Roxas lost to Binay in the vice presidential race. Julliane Love de Jesus/RC