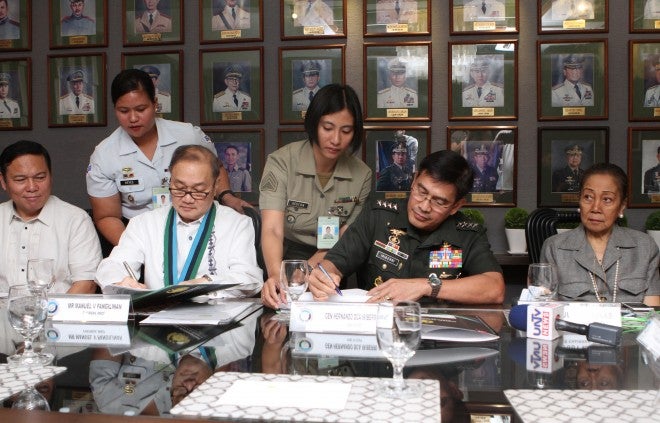 The Makati Medical Center Foundation (MMCF) led by its chair Manny V. Pangilinan and the Armed Forces of the Philippines (AFP) teamed up anew for its public-private partnership to improve military hospitals.

The MMCF and AFP sealed their renewed partnership in a memorandum of agreement signed on Thursday at Camp Aguinaldo.

“Our soldiers deserve better care, better benefits, better equipment because their job is different from a civilian job. We go to work and the only thing we have to brave is traffic. They have to brave the bullets, so that is an entirely different career. Because of that, they deserve the kind of treatment beyond that of ordinary civilian,” Pangilinan told reporters.

The pact allows the AFP and MMCF to share technical resources and open their hospital facilities to training, coaching, workshops, conferences, and mentoring sessions for free to all AFP Medical Center (AFPMC) management staff, residents and doctors.

The partnership is aimed to give the AFP expertise in further enhancing the knowledge and skills of its doctors, nurses, and health care providers in all its military hospitals through the Organizational Strengthening Program.

The AFPMC will disseminate the training obtained to its military hospital staff from the Philippine Army, Navy, and Air Force.

“Through their help, the AFP has been able to access world class medical expertise to boost military health sector,” Iriberri said.

“Because of the significant results of the partnership, the collaboration was extended during the term of my predecessor Gen. Catapang. Today, the AFP renews its partnership with Makati Medical Center Foundation because of the good work that has translated to substantial benefits,” he added. JE