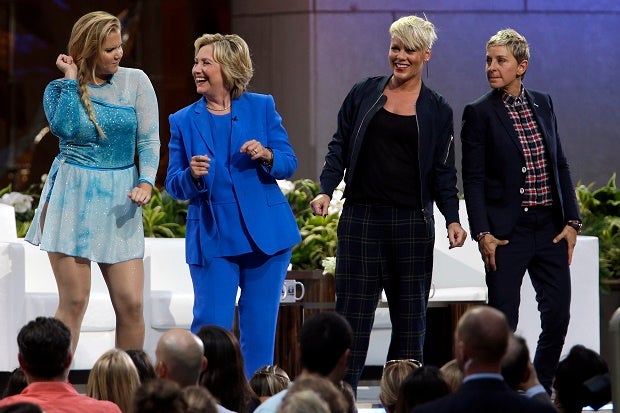 NEW YORK — Hillary Rodham Clinton paid a visit to “The Ellen DeGeneres Show” on Tuesday, receiving the host’s blessing as a presidential hopeful while touching on issues including equal rights and email and delivering a number of clever lines.

Clinton’s appearance on the syndicated TV talk show, which will air on Thursday, was taped on an open-air stage built for DeGeneres at Rockefeller Center, where hundreds of fans gathered.

Another guest was pop singer Pink, but the star attraction was Clinton, and once she and her host were settled in their paired white wingchairs, DeGeneres wasted no time asking about the controversy arising from Clinton using a personal email account on a private server while she was US secretary of state.

Clinton, though maintaining she didn’t violate any Department of State regulations, declared, “I made a mistake, and I’m sorry for all the confusion that has ensued.”

DeGeneres cited one email she said emerged from the tens of thousands being investigated: Clinton had inquired what time “The Good Wife” comes on.

That inspired DeGeneres to ask if Clinton is a fan of “Scandal,” the steamy ABC melodrama set in the White House.

“I TiVo everything,” Clinton replied. “So I’m behind on everything.”

Clinton, a Democrat, received a rapturous reception by DeGeneres, who hailed her as a prospective chief executive by saying, “You are the smartest and most qualified person for this job.”

“Don’t vote for me because I’m a woman,” Clinton told the audience, “but I think if you vote for someone on their merits, one of my merits is I’m a woman.”

She promised, as president, to fight for equal rights and recalled an instance of gender discrimination from her past, soon after she and Bill Clinton wed in 1975.

She said she applied for a credit card but was told she couldn’t have one of her own: “I would have to use my husband’s,” she said. “And I was making more money than he was!”

DeGeneres noted that, were Clinton elected to the White House, she would be among the oldest presidents to take office.

Clinton, who’s 67, had a swift comeback: “The way I look at it, I would be the youngest WOMAN elected president.”

Then, turning serious, she added, “I’m so oriented about the future, I feel revved up and as ready as I did 20 years ago.”

An unannounced guest on the show was 5-year-old presidential expert Macey Hensley, who was quizzed by DeGeneres on past presidents. When asked about James Buchanan’s first lady, she said, “He didn’t have a first lady because he never married.”

Macey asked Clinton what her preferred term for her husband would be if she were president.