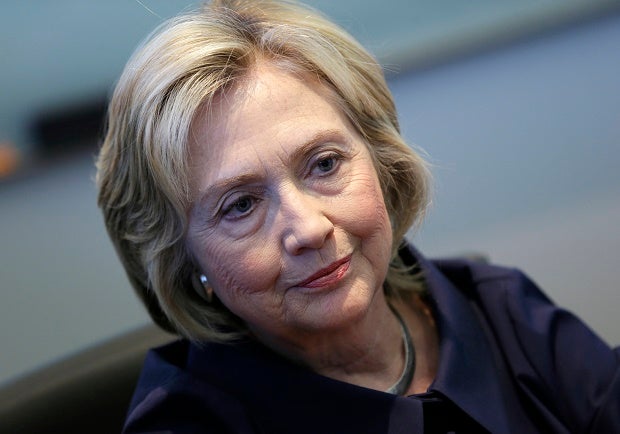 In this Sept. 7, 2015, photo, Democratic presidential candidate Hillary Rodham Clinton speaks during an interview with The Associated Press in Cedar Rapids, Iowa. Clinton says her use of a private email account was a “mistake,” adding that she is “sorry” and takes responsibility for the decision. Clinton offers the apology in an interview with ABC News on Tuesday after declining to do so previously. On Sept. 4, she didn’t apologize for using a private email system when asked directly by NBC News. In an interview with The Associated Press on Monday, she said an apology wasn’t necessary because what she did was “allowed” by the State Department. AP

WASHINGTON — Hillary Rodham Clinton apologized Tuesday for her use of a private email account after declining since last week to express remorse for the State Department arrangement that has shaken her presidential campaign.

Asked about setting up the private email account by ABC News, Clinton said, “That was a mistake. I’m sorry about that. I take responsibility, and I’m trying to be as transparent as I possibly can.”

The Democratic presidential candidate declined to apologize for using a private email system when asked directly by NBC News on Friday, saying she was “sorry that this has been confusing to people.” In an interview with The Associated Press on Monday, she said an apology wasn’t necessary because what she did was “allowed” by the State Department.

READ: Clinton says no email apology: ‘What I did was allowed’

Even as she said she was sorry Tuesday, a new sign surfaced indicating the issue is likely to stick around. Two powerful Senate chairman said they are considering seeking one or more immunity orders for Bryan Pagliano, a former Clinton aide whose attorneys have indicated would refuse to answer questions under his Fifth Amendment right to protect himself against any prosecution. Pagliano was paid to maintain Clinton’s personal server while she was secretary of state.

Senate Judiciary Committee Chairman Chuck Grassley and Homeland Security and Government Affairs Committee Chairman Ron Johnson — both Republicans — wrote to Pagliano that they are considering seeking the immunity in an effort to compel Pagliano to testify, while ostensibly protecting him from any prosecution. The committees’ oversight function is unrelated to any potential prosecution, they wrote. The chairmen asked for a meeting with Pagliano’s attorneys to assess what might be revealed in such testimony.

Clinton’s support in the early Democratic contests has declined against a rival, Vermont Sen. Bernie Sanders, as she has sought to address questions about her use of a private email server while serving as President Barack Obama’s secretary of state. She turned over about 55,000 pages of emails to the State Department that she sent and received using a home-brew server set up at her New York home.

In her interview with AP, Clinton said it would have been a “better choice” for her to use separate email accounts for her personal and public business during her time at the State Department. She also said the issue has not damaged her campaign but has been a “distraction, certainly.”

“But it hasn’t in any way affected the plan for our campaign, the efforts we’re making to organize here in Iowa and elsewhere in the country,” Clinton told AP. “And I still feel very confident about the organization and the message that my campaign is putting out.”

Republican National Committee spokeswoman Allison Moore said the “only thing Hillary Clinton regrets is that she got caught and is dropping in the polls,” adding that Clinton’s “reckless attempt to skirt government transparency laws put our national security at risk.”