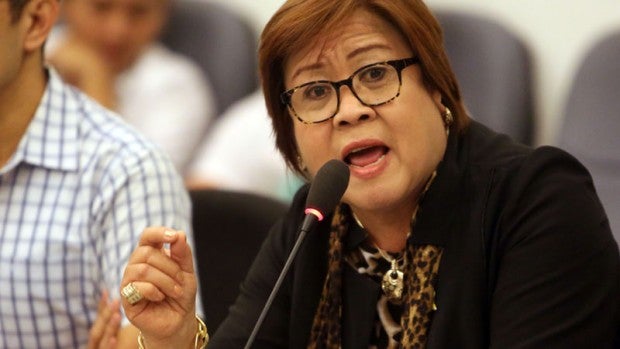 Justice Secretary Leila de Lima denied ordering the National Prosecution Service (NPS) to issue a subpoena against some leaders of the Iglesia ni Cristo (INC) who are facing criminal complaints before the Department of Justice (DOJ).

De Lima said she is not interfering with the NPS’s work.

“Kapag PI (preliminary investigation), hindi ho nakikiaam diyan ang Secretary of Justice (The Secretary of Justice does not interfere with the PI or preliminary investigation)… I do not dictate on the prosecutors, on the NPS, on the Prosecutor-General,” de Lima said adding that the complaint should be subject to the independent and objective evaluation by the prosecutors.

There are two complaints filed against members of Sanggunian, the highest administrative council of INC.

READ: Ex-minister vows to fight Iglesia’s Sanggunian ‘all the way’

Samson, former editor in chief of INC’s official publication Pasugo, alleged that the respondents prohibited them from leaving their house in Quezon City last July after he was accused of being blogger “Antonio Ebanghelista,” who attacked the INC in his blog site.

On the other hand, Lito Fruto filed harassment case against the members of the Sanggunian for supposedly concocting rape charges that led to issuance of an arrest warrant and hold departure order against him after he sided with “Ka Angel Manalo” and “Ka Lottie Manalo,” siblings of current INC executive minister Eduardo Manalo who were also expelled after going against the church’s leadership.

De Lima said the NPS has yet to assign a prosecutor or panel of prosecutor to the complaints because both complaints are still being evaluated.

Prosecutor General Claro Arellano said the NPS have just started evaluating the complaint because the complainant was only able to submit a complete set of complaint last Friday.

Under the DOJ’s Manual for Prosecutors, part of the evaluation is to determine if a subpoena can be issued or the complaint will be dismissed outright.

Section 13, Part III of the Manual for Prosecutors provide that “within 10 days after the filing of the complaint, the Investigating Prosecutor shall either dismiss the same if he finds no ground to continue with the inquiry, or issue a subpoena to the respondent, attaching thereto a copy of the complaint together with the affidavits of witnesses and other supporting documents.”

Arellano said the complaint has been referred to the DOJ’s Anti-Kidnapping Task Force for evaluation.