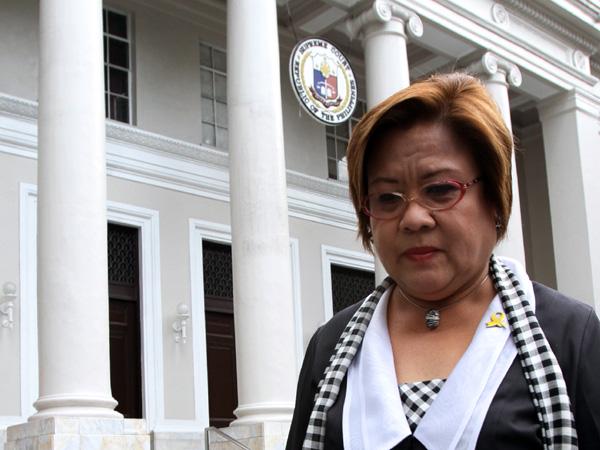 Justice Secretary Leila de Lima denied the reports that she had resigned from office following talks between the government and Iglesia ni Cristo (INC) who reportedly asked for her head.

“I am here to work. Will I be here if I resigned already?” de Lima told reporters Tuesday.

“[There is] no such thing,” de Lima said referring to the reported deal.

De Lima was part of the emergency meeting in Malacañang Sunday evening while thousands of INC members were on Edsa protesting government’s alleged violation of their religious freedom.

She, however, refused to give details about the meeting or comment on the INC protest.

(I appeal for understanding. I won’t issue a statement. I just want to avoid a scenario where I am misquoted or someone would distort or put another spin on my statement which would cause another misunderstanding.)

She said she will resign in due time.

“Hindi po ako magreresign ngayon or in the next few days or several days dahil walang dahilan para ako magresign,” de Lima said, adding that she will only resign once she is 100 percent sure that she will join the senatorial race.

The INC protest started last Aug. 27 at DOJ while de Lima was celebrating her birthday.

The INC questioned de Lima’s “excessive” attention to the complaints filed by expelled members of the INC against the Sanggunian, INC’s highest administrative body. During their protests, INC members also ridiculed De Lima and called her different names. Tetch Torres-Tupas/IDL