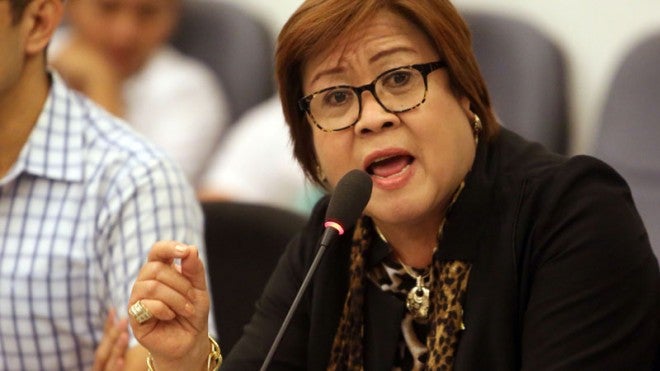 Justice Secretary Leila de Lima is trending like a pop star on cyberspace.

It’s De Lima by a landslide for the past 72 hours with the hashtag #DeLimaBringtheTruth, leaving the hashtags #IglesianiCristo and #EDSA on the wayside.

As of Saturday night, the hashtag #DeLimaBringtheTruth, which was pushed by netizens who want the justice secretary to stay put at her post, had 138,000 tweets.

On Thursday, members of the politically influential Iglesia ni Cristo (INC) camped outside De Lima’s office on Padre Faura Street in Manila, demanding her resignation for meddling in the INC affairs. It was De Lima’s birthday.

According to the INC members, De Lima violated the principle of separation of church and state when she acted on the complaint of Isaias Samson Jr., one of its ministers, who filed a serious illegal detention complaint against the eight members of the church’s Sanggunian in the Department of Justice (DOJ). They maintained that the complaint should have been left to the INC leadership to resolve.

“Would you believe that some people actually ask De Lima to resign just because she’s doing her job? Nakakaloka kayo (You drive us crazy). #DeLimaBringTheTruth,” netizen @dannalovescats said.

“Their actions speak how guilty they are. Kaya dapat (That’s why) #DeLimaBringTheTruth. We support you for justice & truth,” said netizen   @cynchbrul.

“Hindi ang INC ang pinakekealaman ni de lima ung kaso na isinampa (De Lima did not interfere into the internal affairs of the INC but the case that has been filed in her office) …#DeLimaBringtheTruth,” netizen @thinaMaso said.

“The nerve to ask for separation of church and state, eh, it’s common practice naman for ’em,” said @karlsosaurus_rex.

“What do you want DOJ to do exactly? To deny the person due process for his case just because of separation of church and state?” @mskyruh posted on Twitter.

On Friday, the INC members who were on Padre Faura moved to Edsa in Quezon City, occupying portions of the stretch from Ortigas to Shaw.

The massive traffic jam on Edsa fueled netizens’ displeasure all the more.

“#DearINC Sana sa Arena nyo yan ginawa, dba kayo may ari ng arena (You should have staged your rally at the Arena. Don’t you own the Arena?)” said krystinrae.

“#DearINC you are all strong kamusta nmn yung naipit sa EDSA nagutom at pagod lupaylapay di kau affected eh pano n naipit s trapik ok lng (How were those who were stuck in Edsa, those who went hungry and weary? You were not affected because you were not stuck in traffic),” complained netizen mhark daro.

For Zildjan Navarro, the INC should have been aware of the daily travails of the commuting public. “#IglesiaNiCristo I really admire your unity guys. But please, what you’re doing now is really burdensome,” he said.

“Don’t be blown away by mass gatherings. For all you know, those people do not fully understand why they rally? #DeLimaBringTheTruth,” said netizen AlsieTheo.

Netizen Eric James thought that the public should just be mum on the issue. “People should strengthen their faith instead of giving unintelligent and useless accusation to #IglesiaNiCristo. Does it profit you? Nope,” he said.

“Go to Philippine Arena, lalo na kung separation of Church and State ang sigaw nyo (especially if your cry is separation of church and state). Don’t use the State’s major thoroughfare,” said @LawSandel.

Despite these reactions, Filipino humor still found its way into the exchange.

Netizen @JLindleyAgustin appealed for calm and sobriety.   “Hi! Let us all remember that ur anti-INC remarks can lead to religious hatred which is also a crime. Bring it to balance! #IglesiaNiCristo,” he said.