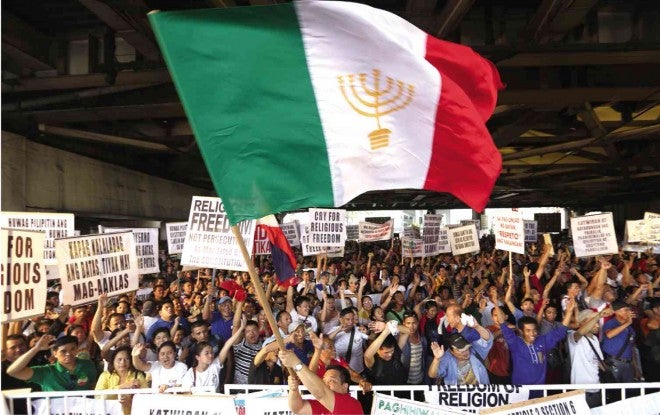 DAY THREE A protester waves the Iglesia ni Cristo banner during the INC rally at the Edsa-Shaw intersection to demand the resignation of Justice Secretary Leila de Lima, whom the sect accuses of meddling in its internal affairs by investigating charges of kidnapping and illegal detention filed by a former INC minister against members of the group’s governing council. An INC source claims they expect a million to turn up by Monday. NIÑO JESUS ORBETA

President Benigno Aquino III has directed government officials not to allow certain people to use the Iglesia ni Cristo (INC) protest on Edsa for their own political interests, Malacañang said Saturday.

“The President mentioned specifically that [the] government should ensure—at least, the executive branch— that there are no opportunities for those who may want to take advantage of the situation for their personal end,” Valte said over Radyo ng Bayan.

Interior Secretary Mar Roxas on Saturday confirmed he had received reports that vested interests were trying to inflame the INC protesters massed on Edsa.

Chief Supt. Joel Pagdilao, National Capital Region Police Office (NCRPO) chief, said people who were not Iglesia were seen at the rally of the politically influential INC on Edsa on Friday night.

Pagdilao, however, played down reports that those people tried to stir passions at the INC rally against Justice Secretary Leila de Lima’s alleged handling of a criminal complaint against members of the sect’s governing council.

The Cojuangcos and Saycon are known supporters of Vice President Jejomar Binay, the opposition’s presidential candidate in next year’s national elections.

The INC protest against Justice Secretary Leila de Lima’s handling of a criminal complaint filed by an expelled INC minister against members of the sect’s governing council went into a third day on Saturday after the group obtained a rally permit from the Mandaluyong City government.

Pagdilao estimated the crowd at the intersection of Edsa and Shaw Boulevard at 2,000.

But INC leaders claimed 8,000 came to the rally on Saturday, including students from the INC College of Evangelical Ministry in Quezon City.

They said they expected participation in the protest to hit 1 million people, with more INC members coming to Manila from the Bicol region, Nueva Ecija, Quezon, Zambales, Batangas and Pangasinan provinces.

There were no reports of untoward incidents on Saturday.

Traffic on Edsa was easier on Saturday with the underpass at the intersection unblocked by protesters.

The protesters withdrew from the Edsa Shrine on Ortigas Avenue and concentrated their forces at the Edsa-Shaw Crossing.

They became more organized than on Friday night, erecting a stage and setting up a sound system, with large streamers bearing their slogans as backdrop.

A police desk was also set up on Shaw, with the stage within sight of the police.

Valte said President Aquino directed Roxas to meet with officials of Quezon City and Mandaluyong City—both are affected by the INC rally—and police officials to find a “way forward.”

She said the meeting was finished Friday and an action plan was expected.

She said the President’s view was that freedom, including freedom of expression, was accompanied by responsibility.

The President was reminding people exercising their rights to respect also the rights of others, including those looking forward to a long, quiet, and peaceful payday weekend, Valte said.

De Lima has not yet acted on the complaint, which makes the Palace wonder what the INC is complaining about, Valte said.

“The DOJ (Department of Justice) has yet to take action on this … No step has been taken. So we do not know what is being said as, or is being construed as, harassment,” she said.

The DOJ follows a process in the filing of complaints regardless of who files a complaint, Valte said. That process will be followed in handling the complaint of Samson, she said.

Prosecutor General Claro Arellano confirmed on Saturday night that the complaint had yet to be forwarded to an investigating state prosecutor.

“[The] case has not been assigned to a prosecutor yet,” Arellano said in a text message to the Inquirer.

Valte said De Lima was not cowed by the INC mass action. The justice chief is someone who “has established herself as one who does her job,” she said.