Fatalities in gun and grenade attack in Los Baños named 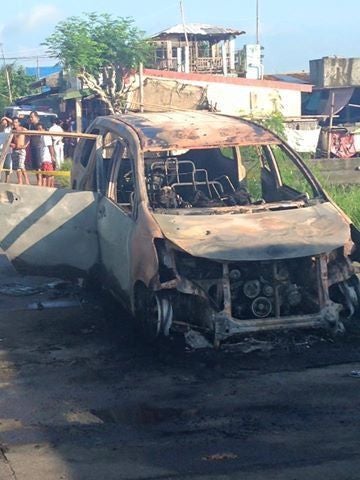 A man and a woman were killed after gunmen shot them and threw a grenande at their car in Barangay Bayog, Los Baños, Laguna Monday morning. CONTRIBUTED PHOTO

Liezel Morales, 36, and her husband Merlito were on board a black Toyota Avanza when two motorcycle-riding men shot at their vehicle several times before hurling a grenade that set it on fire in Barangay Bayog around 6:15 a.m., said Supt. Romeo Desiderio, Los Baños police chief.

Based on what was left of their identification cards recovered by the police, the couple was from Purok 4, Barangay Concepcion in San Pablo City, also in Laguna. “Records from San Pablo (police) showed that they were drug personalities,” Desiderio said, without giving details.

He said that before the attack, some residents had noticed the couple’s vehicle going around the neighborhood “as if they were lost.”

It was then that the gunmen arrived and peppered the couple’s vehicle with bullets. “It seemed they were set up,” Desiderio said.

Police also recovered partly burned cash worth “hundreds of thousands” from the vehicle.

Desiderio said that while the car belonged to a relative of the couple, its plate number was registered to another vehicle. “This means they drove (to Los Baños) using a different plate number,” he said.

He said investigators had suspects in the killing, but he refused to give details as follow-up operations continued.