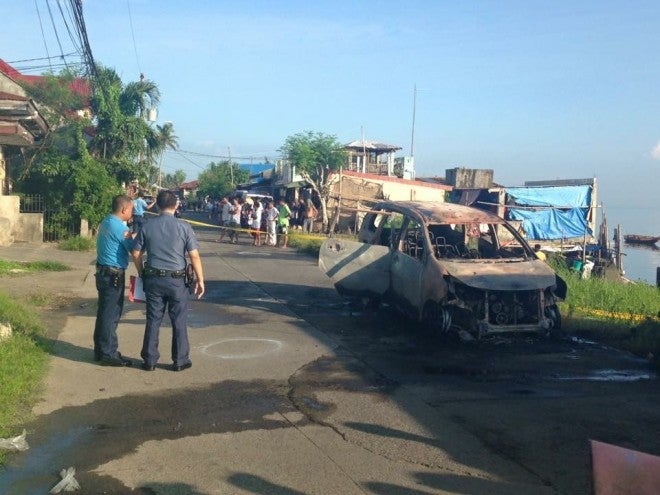 A man and a woman were killed after gunmen shot them and threw a grenade at their car in Barangay Bayog, Los Baños, Laguna Monday morning. CONTRIBUTED PHOTO

Senior Insp. Rosalie Orate, Laguna police public information officer, said in a text message that an unidentified male and female aboard a black Toyota Avanza (ULQ 484) were traveling in Sitio Kanluran in Barangay Bayog when two suspected gunmen fired at their vehicle around 6:15 a.m.

Senior Supt. Florendo Saligao, Laguna police director, said initial police report stated that the assailants, on board a motorcycle, first fired shots at the vehicle before hurling a grenade that set the vehicle on fire.

In a separate interview, a resident, whose name was withheld for safety reasons, said onlookers attempted to pull the bodies out of the burning car, “if only to keep them recognizable,” but they feared that the car’s gas tank might explode too.

He said the vehicle was not familiar in the neighborhood, making them believe that the victims were not from the village.

In a phone interview, Supt. Romeo Desiderio, Los Baños police chief, said the victims died on the spot. He said investigators were looking into a “possible drug-related” motive to the killing.

The investigators have also found identification cards from the victims but were still withholding it for further verification. JE