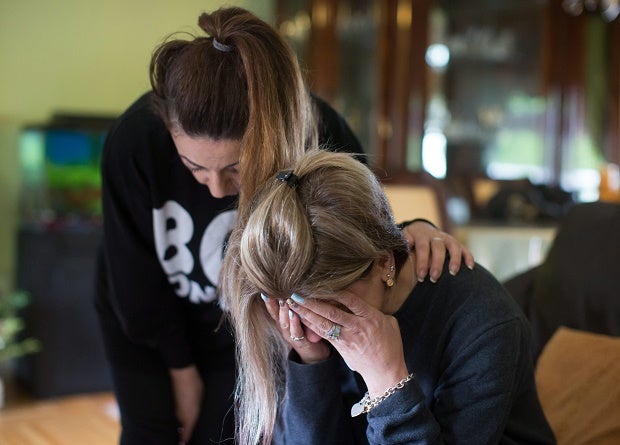 Tima Kurdi is comforted by friend Hoba Said as she is overcome with emotion as she looks at photos of her late nephews Alan and Galib Kurdi, at her home in Coquitlam, B.C., Canada, on Thursday, Sept. 3, 2015. The body of 3-year-old Syrian Alan Kurdi was found on a Turkish beach after the small rubber boat he, his 5-year old brother Galib and their mother, Rehan, were in capsized during a desperate voyage from Turkey to Greece. The family stated that the spelling of the boys’ names had been changed by Turkish authorities to Aylan and Galip, but were in fact spelled as Alan and Galib. PHOTO BY DARRYL DYCK/THE CANADIAN PRESS via AP

COQUITLAM, British Columbia — The aunt of a drowned Syrian boy whose death has sparked global outrage about the plight of refugees in Europe says she still hopes to bring the rest of her family to Canada.

Tima Kurdi said through tears outside her home in Coquitlam, British Columbia, that she plans to help her brother, Abdullah, and her other siblings immigrate to the country she made home more than two decades ago.

Abdullah isn’t ready to leave his Syrian hometown of Kobani, where his sons, 3-year-old Aylan and 5-year-old Ghalib, and wife Rehanna were buried on Friday, she said. They drowned earlier this week after piling into an overloaded boat in Bodrum, Turkey, headed for the Greek island of Kos. Her brother was among the few survivors.

“We’re all emotionally affected by what happened right now,” Kurdi said, surrounded by framed photos of her nephews. “I’m sure he (will) refuse and he doesn’t want to leave Kobani.”

She added: “But one day, I will bring him here. He cannot be by himself there.”

Kurdi has previously said she wanted to bring both her brothers to Canada, but she applied first for her eldest sibling Mohammed, whose application was rejected because it was incomplete.

She said that Mohammed’s failed application prompted Abdullah to embark on the risky journey with his family. She said she sent him $5,000 to pay smugglers to take them in a boat.

Asked whether her brother blames himself, Kurdi said no.

“I am the one who should be at blame,” she said. “I blame myself because my brother does not have money. I sent him the money to pay the smuggler. If I didn’t send him the money, those people still (would be) alive.”

She said the trip was the “only option” left for the family to have a better life in a European country, possibly Germany or Sweden.

They were fleeing horrors in Syria, where militants from the Islamic State group had beheaded one of her sister-in-law’s relatives. Kurdi said her brother had emailed her a photo of the killing but she deleted it because it was too horrific.

Abdullah knew of the dangers, including the risk of smugglers using fake life-jackets, she said, adding he had planned to pay 2,000 euros ($2,230) each for him and his wife to board a safer jet boat, compared to 1,200 euros ($1,338) for a rubber boat. There was no fee for the two boys.

Photos of Aylan’s lifeless body on a beach in Turkey have put Canada’s refugee policy in the spotlight, though Kurdi said she doesn’t blame the Canadian government.

She said she hopes Citizenship and Immigration Canada stops requiring a document missing from Mohammed’s application because it’s impossible for people to secure the necessary paperwork amid a crisis in Syria.

Kurdi spoke to both her brothers by phone on Friday and watched emotional video on CNN of her two young nephews being buried in Kobani.

She said she desperately wished she could be there with her brother to say goodbye.

“Abdullah said to me, ‘I don’t want you to come. It’s dangerous,'” she said, weeping. “I (could) stay there for the rest of my life, sitting beside their grave, feed them, give them water.”

Her grieving brother is proud of his kids for becoming a symbol of the dire situation facing Syrian refugees, and hopes to see leaders step in to end human smuggling, Kurdi said.

“He said, ‘I don’t need anything from this world anymore. What I have is gone.’ But my kids, and my wife, it’s a wake-up call for the world. And hopefully they step in and help others.”