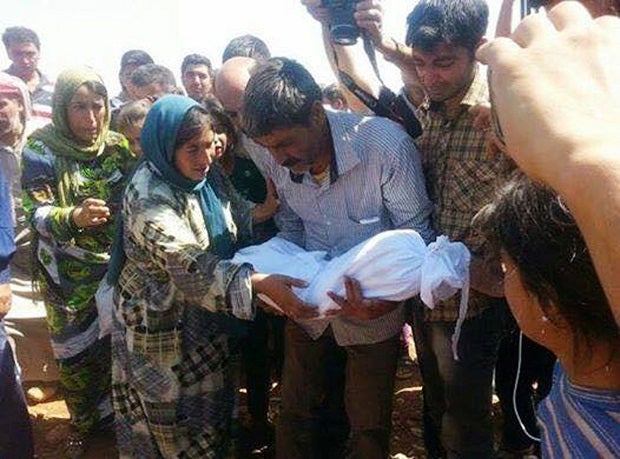 Relatives of 3-year-old Syrian Kurdish boy Aylan Kurdi carry his body, center, during his funeral procession with his mother Rehan, and his older brother Galib, in Kobani, Syria, Friday, Sept. 4, 2015. The Syrian man who survived a capsizing during a desperate voyage from Turkey to Greece buried his wife and two sons on Friday in their hometown of Kobani, returning them to the conflict-torn Syrian Kurdish region they had fled. Aylan’s body was discovered on a Turkish beach in sneakers, blue shorts and a red shirt on Wednesday after the small rubber boat he and his family were in capsized. They were among 12 migrants who drowned off the Turkish coast of Bodrum that day. Sipan Ibrahim via AP

KOBANE, Syria—The father of a three-year-old Syrian boy whose drowning off Turkey shocked the world buried his son, another child and his wife in an emotional funeral in Kobane on Friday.

The father, Abdullah Kurdi, “looked broken and numb” as he addressed a large gathering, said Ebdi who attended the service.

“I don’t blame anyone else for this. I just blame myself,” the devastated father told mourners.

“I will have to pay the price for this the rest of my life.”

He said his children were only a few of the many victims of Syria’s four-year conflict and pleaded for Arab countries in particular to find a “solution to the tragedies” gripping his country.

Relatives of the Kurdi family gathered in Kobane as a gaunt Abdullah carried the bodies of his young children to the cemetery, an AFP photographer said.

There, he laid the tiny body of Aylan, wrapped in a snow-white shroud, into a small grave dug in the red-brown earth.

The two children and their mother drowned off the Turkish coast on Wednesday while trying to reach Europe across the Aegean Sea.

Nothing to live for

A photograph of tiny Aylan’s lifeless body on the beach at Bodrum caused a global outcry and has put a human face to the dangers refugees risk trying to reach safety in Europe.

“Everyone was very sad and crying,” said Ebdi.

He said the family was being honored as “martyrs of Kobane who lost their lives to flee the war.”

Ebdi said he told Abdullah “the world is standing with you,” but the grief-stricken father said he had nothing left in the world to live for.

“What do I want with the world? I’ve paid the highest price,” Ebdi quoted Abdullah as saying.

The father arrived earlier on Friday at the family’s ancestral home of Kobane from Turkey.

There, he had traveled with the bodies of his family from the coastal tourist city of Bodrum to the Turkish border town of Suruc.

A car carrying him and three coffins crossed the border into war-torn Syria, along with several members of Turkey’s parliament.

Ibrahim Ayhan, Dilek Ocalan, and Leyla Guven from the pro-Kurdish HDP party were among the Turkish officials who attended the ceremony and spent time with Abdullah afterwards.

The heart-rending deaths of Aylan, his brother and his mother have dominated headlines and sparked condemnation from world leaders.

Kobane was the scene of fierce fighting between Kurdish militias and Islamic State group jihadists for control of northern Syria in the country’s civil war.

Kurdish forces ousted IS from the town after a months-long struggle in January.

Abdullah’s family was displaced several times inside Syria and had returned to Kobane in June in hopes of settling there.

But IS fighters re-entered the town, holding hostages in several buildings in a two-day stand-off that left more than 200 civilians dead.

The family then decided to try to reach Europe via Turkey, Ebdi said.

After a month of saving up and borrowing from relatives, the family of four boarded a tiny inflatable boat with dozens of other refugees to try to reach the island of Kos.

In a harrowing tale of how the boat capsized, a tearful Abdullah said his children “slipped through my hands.”

Millions of Syrians have been displaced internally since Syria’s conflict began in 2011, and more than four million have been forced to flee the country.