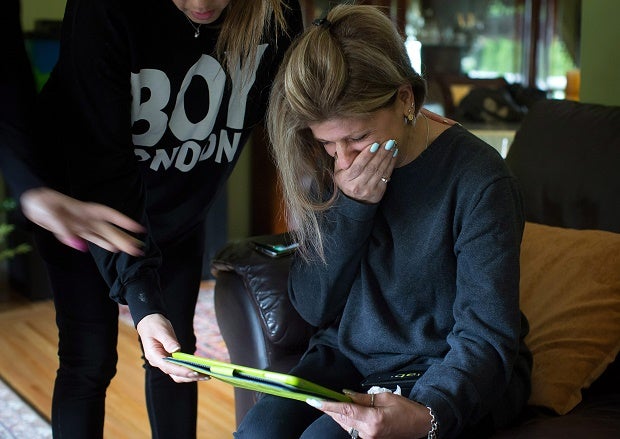 In this Thursday, Sept. 3, 2015 file photo, Tima Kurdi is overcome with emotion as she looks at photos of her late nephews Alan and Galib Kurdi, at her home in Coquitlam, British Columbia, Canada. The body of 3-year-old Syrian, Alan, was found on a Turkish beach after the small rubber boat he, his 5-year old brother Galib and their mother, Rehan, were in capsized during a voyage from Turkey to Greece. The family said the spelling of the boys’ names had been changed by Turkish authorities to “Aylan” and “Galip,” but are actually spelled as “Alan” and “Galib.” Canada has long prided itself for opening its doors wider than any nation to asylum seekers, but the number it welcomes has waned since the Conservative Prime Minister Stephen Harper took power almost 10 years ago. Darryl Dyck/The Canadian Press via AP

TORONTO — Canada has long prided itself for opening its doors wider than any nation to asylum seekers, but the number it welcomes has waned since Conservative Prime Minister Stephen Harper took power almost 10 years ago.

Harper has rejected calls to take immediate action to resettle more Syrian refugees, despite the haunting image of a drowned 3-year-old washed up on a Turkish beach that has focused the world’s attention on the largest refugee crisis since World War II.

Canada denied initial, inaccurate reports that it had rejected a refugee application for the boy’s immediate family, but the story landed in the middle of an election campaign and forced Harper’s party to cancel events and address what Canada is doing for asylum seekers.

In times of crisis in decades past, Canada resettled refugees quickly and in large numbers. It airlifted more than 5,000 people from Kosovo in the late 1990s and more than 5,000 from Uganda in 1972 and resettled 60,000 Vietnamese in 1979-80. More than 1.2 million refugees have arrived in Canada since World War II.

But the number of refugees has declined since Harper became prime minister in 2006. In 2005, Canada received 35,775 refugees. Canada welcomed 23,286 last year. According to the United Nations, Canada has dropped from the fifth-highest refugee-receiving country in 2000 to 15th last year.

The Harper government says it has resettled 2,374 Syrian refugees since January 2014. More than 4 million Syrians have fled their country since the conflict began in 2011.

“Our view has been on refugees we should be doing what we’re doing,” Harper, who is facing re-election Oct. 19, told a campaign event Thursday. “Our message is also that we need to help people that are actually there and who can’t get away, and part of the way we need to help them is to stop awful violence that is being directed at them, displacing and killing them.”

“We have it done in the past, and we can do that again,” Trudeau told a campaign event Friday. “It is something that has made Canada the country that we are.”

Opposition leader Tom Mulcair said military action would not have saved the little boy on the beach.

“Canadians that I meet with across this country want Canada to do its share,” Mulcair said. “If we’re elected, there will be 10,000 people brought to Canada before the end of this year.”

Mulcair compared the picture of the boy on the beach to the iconic Pulitzer Prize-winning photograph from the Vietnam War of the young girl who was severely burned by napalm. That photograph came to symbolize the horrors of the Vietnam War and, ultimately, helped end it. Canada years later granted political asylum to Kim Phuc, who was just 9 years old when the photo was taken.

Catherine Dauvergne, an immigration expert and the dean of law at the University of British Columbia in Vancouver, said that with countries like Turkey taking in 1.59 million Syrians, Canada should take in 50,000 this year and 100,000 next year, considering the scope of the crisis.

But Dauvergne said Harper has made it harder for refugee applicants to arrive and stay in Canada. The measures include a stronger ability to detain. She said that while Canada does take in more immigrants overall, the vast majority are economic immigrants, meaning they’ll help the Canadian economy or the government is confident they won’t need assistance.

Less than 10 percent of newcomers to Canada are refugees.

“To say that the number of newcomers has gone up when in fact the number of refugees has gone down is really just to say we’re completely prepared to use immigration for our own needs but absolutely unprepared to allow people to move here for human rights reasons,” Dauvergne said.

Alex Neve of Amnesty International’s Canada branch said the country is not the welcoming place it once was for refugees.

“What we’ve seen from the Canadian government is a pittance, especially for a country that has a long and proud record of pursuing bold refugee resettlements in the past. We’ve seen nothing that matches what we’ve done in the past. And we’ve done nothing that rises to the enormity of the need in the world,” Neve said.