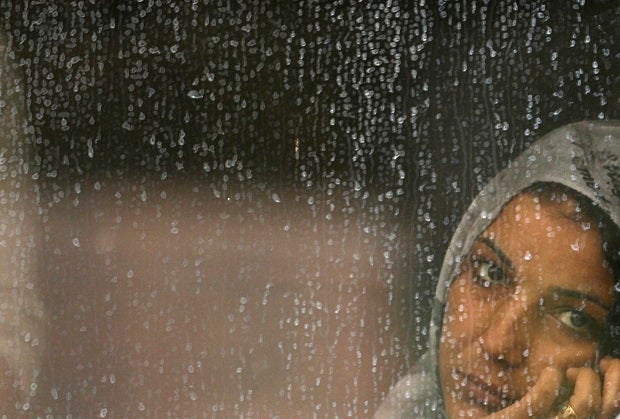 In this Sept. 4, 2015 file photo, a woman looks out of a train that has stopped in Bicske, Hungary. Over 150,000 migrants have reached Hungary this year, most coming through the southern border with Serbia. Many apply for asylum but quickly try to leave for richer EU countries. AP FILE PHOTO

BICSKE, Hungary — After misery, delivery. Hundreds of migrants, exhausted after breaking away from police and marching for hours toward Western Europe, boarded buses provided by Hungary’s government as Austria in the early-morning hours said it and Germany would let them in.

Austrian Chancellor Werner Faymann announced the decision early Saturday after speaking with Angela Merkel, his German counterpart — not long after Hungary’s surprise nighttime move to provide buses for the weary travelers from Syria, Iraq and Afghanistan.

With people streaming in long lines along highways from a Budapest train station and near a migrant reception center in this northern town, the buses would be used because “transportation safety can’t be put at risk,” said Janos Lazar, chief of staff to the prime minister.

Lazar blamed Germany’s “contradictory communications” and the European Union for the crisis.

The asylum seekers had already made dangerous treks in scorching heat, crawling under barbed wire on Hungary’s southern frontier and facing the hostility of some locals along the way. Their first stop will be Austria, on Hungary’s western border, though most hope to eventually reach Germany.

Hungarian authorities had refused to let them board trains to the west, and the migrants balked at going to processing centers, fearing they would be forced to live in Hungary.

But government spokesman Zoltan Kovacs told The Associated Press the government was providing buses for the migrants on a one-time basis and Hungary would continue to abide by European Union rules, including the obligation to register all migrants reaching the country.

“The situation at Keleti train station, on the highways and on the train lines threatened to shut down part of Hungary’s transportation system, which led to the decision to take the migrants to the Hungarian side of the border,” he said.

Abdullah Baker, 26-year-old physician from Aleppo, who left his parents and four sisters behind, wants to work at a hospital in Freiburg, Germany, where a friend is already employed. He and his two friends seemed to be the only Syrians on a bus carrying about 50 people.

“My family had tears of joy when I told them about the bus,” Baker said. “We always fear the unknown but I long for closure.”

Mohammed, a 35-year-old Syrian man who was packing his belongings in the sunken plaza of Keleti train terminal and informing other migrants about the buses, said he was happy to be leaving Hungary.

“The situation is so ugly here and I want to send message to all Syrian people and all refugee people — do not come to Hungary,” he said.

Under European law, refugees are supposed to seek asylum in the first European Union country they enter. But many see limited economic opportunities and a less welcoming atmosphere in Hungary than in Germany, Sweden and other Western nations.

In what the Hungarian media called a “day of uprisings,” about 350 people broke through a police cordon Friday and began heading to Austria, 135 kilometers (85 miles) to the west, on tracks leading away from the railway station. Surprised riot police scrambled for their helmets as the crowd surged from the front of the train.

One man, a 51-year-old Pakistani, collapsed about 800 meters (yards) from the station and died despite efforts to rescue him.

Those left behind, mostly women and children, were boarded onto buses and taken to the nearby asylum center.

Hours earlier, about 2,000 people set out from Budapest’s Keleti station for a 171-kilometer journey (106-mile) to the Austrian border. At first police tried to block them, but they quickly gave up. By nightfall, the marchers had already covered about 50 kilometers (30 miles).

Along the way, some met with gestures of support. Many flashed the V-sign for victory, while some handed out bottles of water to the weary travelers.

A small number made clear the new arrivals were not welcome. “Go home already,” one man shouted in Hungarian from a passing car.

Also on Friday, the Hungarian parliament tightened its immigration rules, approving the creation of transit zones on the Hungarian border with Serbia where migrants would be kept until their asylum requests were decided within eight days. Migrants would have limited chance to appeal those decisions.

One man leaving Budapest on foot said he expected the journey to Austria to take three days. Osama Morzar, 23, from Aleppo, Syria, was so determined not to be registered in Hungary that he removed his fingerprints with acid, holding up totally smooth finger pads to an Associated Press reporter as proof.

“The government of Hungary is very bad,” said Morzar, who studied pharmacology at Aleppo’s university. “The United Nations should help.”

A couple from Baghdad, Mohammed and Zahara, who marched with a toddler, said they had been in a Hungarian asylum camp and got roughed up by guards because they refused to be fingerprinted. She said she has family in Belgium and is determined to seek asylum there. They would not give their last names.

Saleh Abdurahman, a Palestinian refugee from Syria who marched from Budapest, said he was set on escaping a Middle East made intolerable by wars that he blames on the United States and Europe.

“We don’t want to go to their countries because we’d like to be rich,” he said. “We only need to be human beings.”

In Syria, a man whose family died when a small rubber boat capsized during a desperate voyage from Turkey to Greece buried his wife and two sons in their hometown of Kobani. Photos of the lifeless body of Abdullah Kurdi’s 3-year-old son after it washed up on the beach drew the world’s attention to the dangers faced by those fleeing war and poverty in the Middle East, Asia and Africa.

“He only wanted to go to Europe for the sake of his children,” said Suleiman Kurdi, an uncle of the grieving father. “Now that they’re dead, he wants to stay here in Kobani next to them.”

Across Europe, the refugee crisis is becoming more dramatic.

In Geneva, the U.N. refugee agency said Friday that nearly 5,600 people crossed from Greece to Macedonia a day earlier. That’s roughly double the already high 2,500 to 3,000 per day in recent weeks.

“That is a dramatic number,” said UNHCR spokeswoman Melissa Fleming, saying it was the highest she’s heard yet.

Earlier Friday, Antonio Guterres, the head of the U.N. refugee agency, issued a statement urging the EU to create a “mass relocation program … with the mandatory participation of all EU member states” for would-be recipients who clear a screening process.

He said a “very preliminary estimate” would be for the creation of at least 200,000 places to be added across the bloc.

The U.N. comments came a day after a round of recriminations among EU leaders. Hungarian Prime Minister Viktor Orban has said the human wave is a German problem, but Merkel said the obligation to protect refugees “applies not just in Germany, but in every European member.”