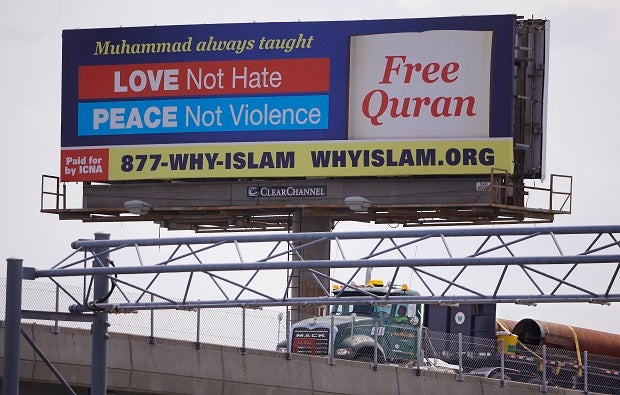 In this Monday, Aug. 31, 2015 photo a billboard proclaims the teachings of Islam near the Massachusetts Avenue Exit of I-93 north in Boston. Dozens of billboards with Muslim themes are sprouting nationwide, proclaiming what organizers say is the true message of Islam and its prophet, Muhammad: peace and justice, not extremism and violent jihad. AP

BOSTON, Massachusetts — Dozens of billboards with Muslim themes are sprouting nationwide, proclaiming what organizers say is the true message of Islam and its prophet, Muhammad: peace and justice, not extremism and violent jihad.

They feature statements such as: “Muhammad believed in peace, social justice, women’s rights” and “Muhammad always taught love, not hate; peace, not violence.” Also listed are a website and a phone number people can call for more information.

The group’s president, Naeem Baig, said the idea for the campaign arose after January attacks in Paris by Islamist militants on the French satirical weekly Charlie Hebdo and a kosher grocery store killed 20 people, including the three attackers.

The perpetrators wrongfully understood the teachings of the Prophet Muhammad, Baig said, and the American Muslim community wanted to reclaim the message.

As for whether the campaign would face a tougher audience in Boston, with the 2013 Boston Marathon bombings still fresh in many people’s minds, Baig said: “That’s the whole point of the campaign; there are extremists in all communities.”

Muslim brothers Tamerlan and Dzhokhar Tsarnaev carried out the attack at the marathon finish line that killed three people and wounded more than 260 others. Prosecutors said the bombings were intended to punish the US for its wars in Muslim countries.

“As a Muslims, it hurts me when I see someone abusing my faith, abusing the teachings of the prophet,” Baig said.

Bilal Siddiqui, a college student who volunteers for ICNA in Boston, said some callers vent and “spew hatred.” But after speaking to a knowledgeable person on the hotline, “oftentimes their approach becomes softer and they’re more keen to learn more,” he said.

Wilherm Edward, a non-Muslim who works at an auto parts store situated near one of the three Boston billboards, said he thinks the campaign is a great idea. Edward’s line of work, he said, exposes him to people from all walks of life, including Muslims.

“All the ones I’ve seen, they’re all good people,” he said.

While praising the billboard campaign as a “laudable effort,” the leader of Boston’s biggest mosque said his institution prefers to take a different approach.

“We feel our actions speak louder than words,” said Yusufi Vali, executive director of the Islamic Society of Boston Cultural Center. The group aims to live the faith’s values through its food pantry and its work on affordable housing and criminal justice, Vali said.

“People appreciate your being real a lot more than the messaging and marketing,” Vali added. “I think the way we change people’s hearts is through our actions and deeds.”

Read Next
Guatemala prosecutor gets judge’s order to detain president
EDITORS' PICK
Malls adjust ‘NCR Plus’ operating hours for April 12-30 MECQ
Speed up your game with the new vivo Y20s [G]
Pru Life UK receives four golden arrows for solid corporate governance
Metro Manila to have shortened curfew hours from 8 p.m. to 5 a.m. under MECQ
Pre-order the new vivo Y20s [G] to get a free TWS earphone
‘NCR Plus’ to be under MECQ starting April 12 until April 30 — Palace
MOST READ
Stop ‘creeping occupation’ of ‘militia’ boats in WPS, Pacquiao asks China
Bea Alonzo clarifies status of her relationship with Dominic Roque
Convicted former aide of Sen. Bong Revilla dies — BuCor
Locsin to China: ‘Then move out’
Don't miss out on the latest news and information.