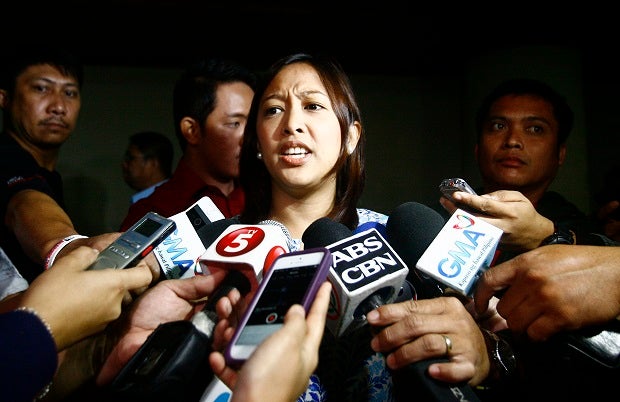 Makati City Rep. Abigail Binay believes there is a conspiracy behind the filing of malversation charges against her in the Office of the Ombudsman. INQUIRER PHOTO

Makati City Rep. Mar-Len Abigail Binay said there was a conspiracy in the malversation charges filed against her before Office of the Ombudsman on Tuesday.

In a statement, Binay accused Sen. Antonio Trillanes IV of being behind the complaint filed by lawyer Renato Bondal.

Bondal has filed malversation of public funds against Binay over the alleged misuse of her Priority Development Assistance Fund by funneling it to “fake” nongovernment organizations.

The complaint against the Binay siblings came a week after Representative Binay exposed the “overpriced” consultants of Trillanes.

Binay said she was no longer surprised of the charges filed against her, citing she had supporting documents to prove her PDAF was properly used.