This is one of the main setbacks the present Komisyon sa Wikang Filipino (KWF) has identified as it assessed the implementation of the agency’s mandate since its creation in 1991, when KWF replaced the Surian ng Wikang Pambansa.

One reason for this apparent lack of knowledge of what “Filipino” is, according to KWF chair Virgilio S. Almario, is that there has never been an explicit or textbook definition of the language and, as a result, the language agency or its predecessor has never had a clear plan or road map for the implementation of its mandate of truly developing the Filipino language.

This is why KWF is hard at work filling up the inadequacies of the past. At the closing of the three-day Pambansang Kongreso sa Pagpaplanong Wika (National Congress on Language Planning) in Lingayen, Pangasinan, on the first week of the National Language Month (August), which was attended by more than 1,100 schoolteachers, government workers and other participants, Almario presented a detailed agenda for language.

Under standardization were three tasks: A national orthography (now being disseminated) and a national grammar (both will be the bases and models of any regional orthography or grammar); national literacy through the harmonization of the Mother Tongue-based, Multilingual Education; and the teaching of Filipino as a second language in the regions. 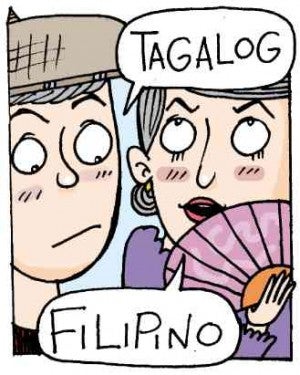 The support activities for the agenda are what the KWF is doing now, such as conducting seminars and workshops, publishing the Aklat ng Bayan books under the long-term Library of Knowledge program, networking and use of media, and close coordination and relations with such agencies as the Department of Education, Commission on Higher Education, National Commission for Culture and the Arts, Technical Education and Skills Development Authority and others.

Despite the setbacks, it is undeniable that Filipino has become the lingua franca of majority of the archipelago’s inhabitants, who should be called “Filipinos” as well, in the eyes of KWF.

In 1989, a survey conducted by Ateneo de Manila University further showed that 92 percent understood Tagalog in the whole country, 83 percent could speak it, 88 percent could read and

81 percent could write in it.

Almario notes that the 26-year-old Ateneo de Manila survey has to be updated to show if the national language has covered even more territory in its development, or if, on the other hand, the figures have shrunk.

But even in 1989, Almario points out, the popular acceptance and usage of the national language could no longer be denied.

“Still,” he cautions, “even with the spread of Filipino as lingua franca, much has to be done toward propagating its usage in the various spheres of society and the dominions of power, for it to become a truly national, intellectualized and modernized language.”

Nationalization and modernization, KWF’s twin agenda, must be undertaken in tandem, simultaneously. One cannot do without the other, Almario says. Marne Kilates, Contributor