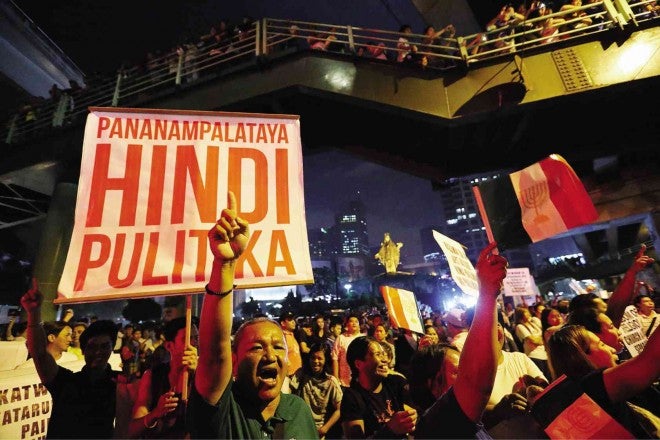 ‘FAITH, NOT POLITICS’ So goes the message on a placard hoisted by members of the Iglesia ni Cristo (INC), which moved its forces to the Catholics’ hallowed Edsa Shrine in Quezon City on Friday night after a mass action that began the previous day at the Department of Justice (DOJ) in Manila. The religious group wants the DOJ to stop its investigation of a criminal complaint filed by an expelled minister against INC advisory council members. LYN RILLON

NOT all Iglesia Ni Cristo (INC) members share the sentiments of those protesting on Edsa.

“As I see my brethren being misled, and how they are acting towards those they perceive to be against them, my heart just grieves for them.”

This was the reaction of Ka Malen, an INC member from the western part of Metro Manila who posted a series of tweets on Twitter saying she wants to “hide and melt” in embarrassment, over the ongoing protest of INC members at Edsa-Shaw Boulevard in Mandaluyong City.

Ka Malen, who requested anonymity because of “risks of expulsion from the church,” told INQUIRER.net that she felt disappointed with her fellow INC members because that was not the way they were taught to behave.

“We were taught to be kind and be considerate ever since we were young children. All my life, I have looked at our leaders, especially to the Tagapamahalang Pangkalahatan [the Executive Minister] for spiritual comfort and guidance, especially when times are hard,” Ka Malen said.

“But now, as I see my brethren being misled, and how they are acting towards those they perceive to be against them, my heart just grieves for them,” she added.

Asked about INC’s accusations that Justice Secretary Leila de Lima was supposedly prioritizing the illegal detention case filed by dismissed minister Isaias Samson against the church leadership, Ka Malen said there was nothing wrong when “someone who is being harassed decides to seek help from the government.”

“I don’t see anything wrong with it—he has been expelled, so no one should stop him at that. The accused parties should prove to the court if they are innocent,” Ka Malen said.

“The way I see it, separation of the Church and State should not be used in this issue,” she added.

Calling for separation of church and state, INC members flocked to the Department of Justice compound on Thursday to protest De Lima’s supposed meddling in internal church affairs. They trooped to Edsa on Friday evening, causing heavy traffic in the major thoroughfare.

Ka Malen provided INQUIRER.net with photos, including that of her family after a worship service and the choral group she was teaching, as proof of her identity and affiliation with INC, but also requested that she not be identified.

“I was what you call a handog member—since childhood. Most of my family are members, too,” she said.

Noting that a whole family was once expelled from the sect for posting criticisms against the church and its leadership, Ka Malen said she was ready for the worst.

“There are a lot of us who feel the same way,” she said.

Asked what she wants to say to her fellow INC members picketing on Edsa, Ka Malen said: “Can you change a fanatic? Change comes from within.” Yuji Vincent Gonzales